The Split in the Greek Patriarchate of Antioch (1724-2024). Three Centuries Later. Retrospective and Prospect. 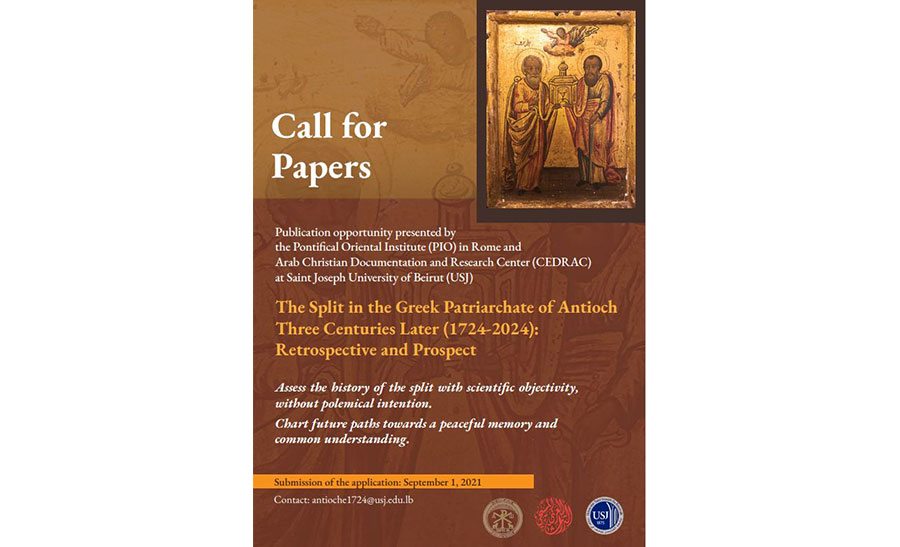 In July 1724, the See of the Greek (known also as Rūm) Patriarch of Antioch was claimed by two titulars, Cyril Ṭānās (previously known as Seraphim) and Sylvester of Cyprus. Unlike the rivalries between candidates that were common in the See of Antioch, this double election, in a very particular ecclesial, economic and political context, resulted in the creation of two separate Churches.

In the wake of the Reformation in the West and the resulting competition between churches, the Church of Rome undertook a cultural project of institutional reform that affected the lives of the faithful. During a period of less than a century, from around 1650 to 1750, Latin missionaries succeeded in creating a movement for union enabled by the support of European embassies, in spite of their occasional interference. At the same time, the Greek Patriarchs of Constantinople and Jerusalem intensified their efforts to bring Antioch into “Orthodoxy”. After a period of Latin influence, several local church leaders sought to distance themselves more and more from Catholicism and the Western Reformation.

Although local prelates were materially and culturally impoverished, they profited from a network of support from the Orthodox powers (Romanian principalities and Russia) and even from the Porte. Hence, they not only tolerated the pastoral and spiritual contribution of the Latin missionaries, but they also benefited from the commercial support offered by the label “Catholic”, insofar as it was still possible to manage the mounting pressures.

Following the double patriarchal election of 1724, the Greek Antiochian community gradually drifted into two distinct Churches, one Orthodox, and the other Catholic. The markers of differentiation between these two communities multiplied in a framework of more general competition. Over time, the (re)construction of the narrative surrounding the division of 1724 was, to varying degrees, subjugated to polemical agendas meant to develop an identity of opposition to the other.

Roman missionary activity and the Orthodox reaction became catalysts for a literary production mainly in Arabic, whose principal characteristic was apologetic and polemic. It could be considered that this climate of intellectual and literary emulation, among other factors, paved the way for the Nahḍah movement.

In this confrontation, a clash of different ecclesiological visions took place. The arsenal of Latin arguments accumulated in the wake of the Counter-Reformation entered Catholic circles mainly through the Maronites. On the other hand, Byzantine arguments against papal primacy and infallibility were taken up by the Antiochian Orthodox not without a tinge of pride in being a Church of Petrine foundation.

The CEDRAC and the PIO plan is to publish a systematic and ecumenical study in 2024 to commemorate the third centenary of the split of the Greek Patriarchate of Antioch. The objective is to consider what was at stake in this "cold-blooded" division. The approach aims to assess the history of the split with scientific objectivity, without polemical intention, in the hope of charting future paths towards a peaceful memory and common understanding.

The publication will thus be organized according to the following five areas:

1- Historical Context:
Focusing on the split itself, the event and its context (17th to the 18th century);

2- Historiography:
Dealing with the post-division narratives

3- Polemical Literature:
Dealing with the controversial texts of that time

4- Ecclesiology:
Elucidating the historical development of the underlying theologies and ecclesiastical practices

5- Ecumenical Perspective:
Addressing the past and contemporary significance of the split and opens up future perspectives and new horizons.

This research will be published by CEDRAC in the series “Textes et études sur l’Orient chrétien” (TÉSOC).

Submissions should not exceed 6,000 words and include an abstract and bibliography (following international academic standards). The writing should be accessible to a wide audience.

How to participate?
We invite you to submit applications to antioche1724@usj.edu.lb consisting of:

2. A working title and an abstract of 500 words