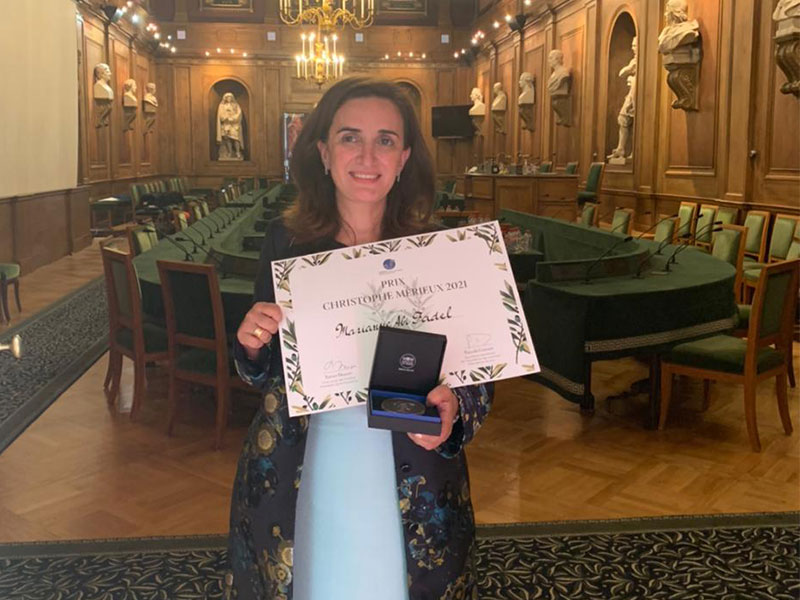 The Scientific Grand Prize of the Institut de France’s Christophe and Rodolphe Mérieux Foundation, also known as the Christophe Mérieux Prize, was awarded this year to Professor Marianne Abi Fadel, Dean of the Faculty of Pharmacy, Director of the Laboratory of Biochemistry and Molecular Therapies (LBTM) and Director of the Rodolphe Mérieux Laboratory (LRM-Lebanon). The prize was presented by Ms. Pascale Cossart, Perpetual Secretary of the Academy of Sciences and President of the Scientific Jury of the Institut de France, in the presence of members of the Academy, Mr. Alain Mérieux, Ms. Chantale Mérieux, as well as the recipients of other scientific and literary prizes.

Ms. Pascale Cossart introduced Professor Abi Fadel as follows: “After studying pharmacy in Lebanon, Marianne Abi Fadel carried out a thesis at INSERM in Paris. This thesis led her to the extraordinary discovery of the gene PCSK9 which induces hypercholesterolemia when mutated. This discovery has led to the development of new drugs that control cholesterol levels and cardiovascular complications. Back in Lebanon, Marianne Abi Fadel has broadened her fields of focus, she studied and discovered the genetic basis of different diseases affecting lipid metabolism, and is now investigating PCSK9 in different pathologies including infectious diseases. Since the beginning of the pandemic, in a country that was shaken by the dramatic Beirut Port explosion, she has increased the number of screening campaigns among vulnerable populations in Lebanon and has set up different projects on SARS-CoV-2, along with the teams of LRM, LBTM and Fondation Mérieux.”

Ms. Cossart concluded by addressing the winner herself: “The jury was greatly impressed by your achievements and would like to join me in congratulating you.”

The winners’ thank-you-notes were then delivered.

Given the unprecedented economic crisis that is currently affecting the country, the prize will be awarded to students from the School of Medical Lab Technicians (ETLAM) and the Faculty of Pharmacy (FP) of USJ.