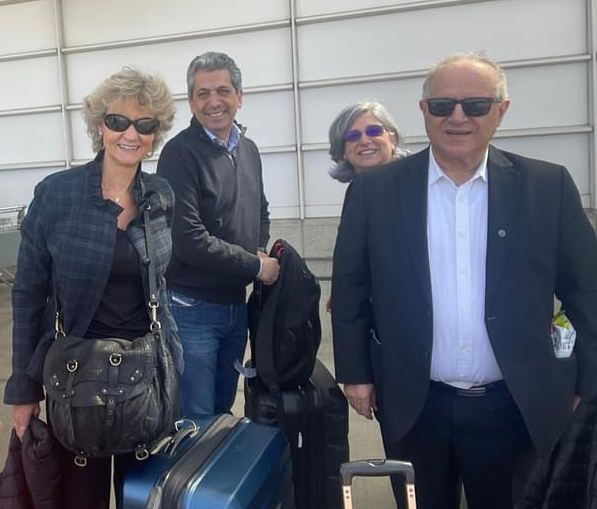 Following the visits to France and the UAE, a USJ delegation led by Prof. Salim Daccache s.j., Rector of USJ and Chairman of the Board of Directors of Hôtel-Dieu de France, traveled to the United States of America from April 20 to April 28, 2022. He was joined by Mrs. Cynthia Ghobril Andrea, Director of the Fondation USJ-HDF, Dr. Christian Makary, President of the Federation of USJ Alumni Associations, and Mrs. Randa Hakim, Director of the USJ North America Office. The trip was primarily intended to meet with USJ and HDF Alumni and friends to inform them of the significant challenges currently affecting our students and the hospital, as well as to keep them up to date on our ongoing campaigns, so that the sacred rights to education and health care do not become luxuries as a result of the crisis, but remain accessible to all!

In Washington, from April 20 to 22, the delegation held several meetings with key DC officials.

A luncheon in honor of the delegation was held at the Lebanese Embassy in Washington, D.C. at the invitation of the Chargé d’Affaires ad interim at the Embassy, Mr. Wael Hachem, and in the presence of the former Lebanese Ambassador to Washington, Dr. Farid Abboud. The luncheon was preceded by a meeting on the importance and future of the educational sector in Lebanon and the various activities undertaken by USJ with its alumni residing in North America.

A meeting with Fr. William L. Georges at the Gregorian University Foundation was followed by a fruitful discussion and sharing of experiences.

The day ended with a dinner reception offered by the Nammour family at their restaurant Georgia Brown’s, which was attended by many DC Alumni and friends of USJ, including: Rev. Fr. Michael J. Garanzini, President of the AJCU, Ambassador Edward Gabriel, President and CEO of the American Task Force on Lebanon (ATFL), and his wife, Mr. Wael Hachem, Chargé d’Affaires ad interim at the Embassy in Washington, D.C., Dr. Farid Abboud, former Ambassador to Washington, D.C., Mr. Peter Tannous, Dr. Aline Charabaty, President of the USJ Alumni and Friends – Washington D.C. Chapter, and members of the committee.

During the dinner, the Rector presented Mr. Wael Hachem with a Medal of Merit as a sign of recognition for his support, and Mr. David Nammour, a Medal of Honor for his hospitality and generosity.

The delegation and the Foundation would like to extend its warmest thanks to the Nammour family, and to all those who have given their time and/or money to make a difference by contributing to the Donate to Educate Campaign and by sponsoring USJ students who are struggling to continue their education in Lebanon in these difficult times. On behalf of every student, thank you from the bottom of our hearts for your support and solidarity.

In Boston, a fundraising reception was organized on April 23 by the USJ Alumni and Friends – Boston Chapter, at the invitation of the President of Northeastern University, Mr. Joseph E. Aoun and his wife, to raise funds for Saint Joseph University of Beirut and its hospital, Hôtel-Dieu de France. After the meeting, Prof. Daccache presented President Aoun with the 145 years of USJ medal as a sign of recognition and esteem.

The Rector met with Fr. William Leahy, President of Boston College, who had already supported USJ during the Beirut Port explosion of August 4, 2020, thanking him for his continued interest and efforts to enhance the relationship between the two universities.

In New York, on April 24, a meeting was held between the Rector and the New York Alumni at the Lebanese restaurant Yara. The following day, a dinner took place in honor of the Beirut delegation, at the invitation of Dr. Gabriel Sara and his wife, Mrs. Nada Sara, President of the USJ Alumni and Friends – New York Chapter, in the presence of Mrs. Nadine Sfeir Khoury and Mr. and Mrs. Raymond Debbané. On this occasion, the Rector presented the Medal of Honor to Mr. Debbané as a sign of recognition and thanks for his solidarity with USJ.

The delegation visited Bishop Gregory Mansour at the Diocese of Brooklyn. Following the discussion on the situation of the University and its students, the meeting was followed by a visit to the Maronite Catholic Cathedral, Our Lady of Lebanon.

In Detroit, a dinner reception in support of USJ was hosted on April 27 by Mr. Sejaan Ghafari, President of the USJ Detroit Alumni Chapter, and his wife at their residence. The reception was attended by many USJ Alumni and friends. The Rector presented Mr. Sejaan Ghafari with the Medal of Honor as a sign of appreciation for his unwavering dedication and loyalty.

The US visit ended with a visit to Fr. George Shalhoub at St. Mary’s Antiochian Orthodox Basilica in Detroit, again at the initiative of Mr. Sejaan Ghafari.