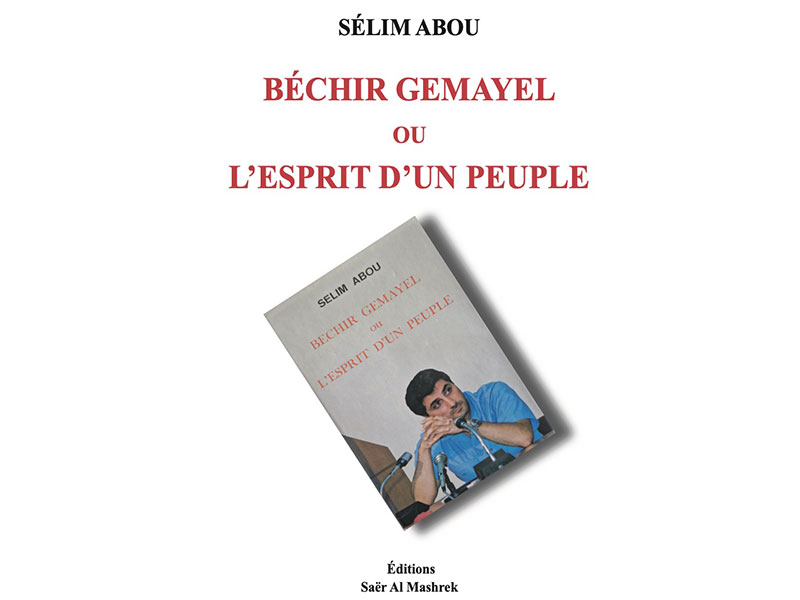 September 12, 2022 will witness the release of a new edition of Professor Selim Abou’s book Béchir Gemayel ou l’Esprit d’un peuple - (Bachir Gemayel, the Spirit of the People). This initiative of Yves Choueifaty is printed and distributed by the Saër Al Machrek Publishing House, 40 years after the assassination of the President of the Republic of Lebanon. The first edition of this book was published in 1984 by the Anthropos Publishing House in Paris which has kindly authorized the publication of this second edition.

In his foreword to the first edition, Professor Selim Abou s.j. (1928-2018), Rector of Saint Joseph University of Beirut (USJ) from 1995 to 2003, whose speeches set the pace for the resistance against the Syrian occupation, stated that Bachir Gemayel “had to die” because “he was becoming an inconvenience” as “the leader of the Resistance” who “for six years held in check the political maneuvers and military pressure of those who, as refugees on Lebanese soil, wanted to carve out an alternate homeland for themselves”, as “a political leader” who “has constantly spoken to his people the word of truth and tirelessly condemned, in a clear and straightforward manner, the cynicism of many regional leaders who believe that concealing the facts will salvage their honor and for whom lies are diplomacy, cunning is strategy, blackmail is negotiation and repression is persuasion”, and finally, as “President-elect”, who “displayed his democratic choices and immediately took a stand with the free, striking a significant blow not only to the ideologies propagated by the regional totalitarians and terrorists, but also to the ambitions of their powerful supporters and their repeated attempts to dominate Lebanon.”

On the back cover of the new edition, Yves Choueifaty, a Lebanese entrepreneur living in France, an alumnus of Collège Notre-Dame de Jamhour, and a fierce defender of human rights, wrote: “Forty years after the assassination of 1982, it was necessary to reprint Selim Abou’s book Béchir Gemayel ou l’Esprit d’un peuple. It is about making it accessible to the generations of the present and the future. In these moments of trouble that Lebanon is going through, his story and his interpretation of the Bachir Gemayel legacy, his philosophy, and his national vision, remain as relevant as ever and as inspiring and foundational as they were. It reflects an authentic image of Bachir Gemayel, a politician, a fighter for his country, President of the Republic, a model citizen, rebel, and statesman. The Lebanese of today truly appreciate the man that is Bachir Gemayel, who serves as an inspiration to them amid the current tragedy of the disintegration of the Lebanese state and as a role model they can look up to in contrast with the current Lebanese leaders.”

In his foreword to this new edition, Professor Salim Daccache s.j., current Rector of USJ, recalls that “this six-chapter book retraces the birth of a myth that emerged after the assassination of the President to the birth of the spirit of the people and surveys the short twenty-two-day long presidential mandate, focusing on the history of the military resistance as well as the development of a socio-political and cultural project that constitutes the culmination of the resistance.”

He adds, “the meticulous attention of Selim Abou to combining a plethora of historical references and massive documentation to his text is striking, thus supporting the scientific quality of this biography which stands out from the biographical genre itself. Therefore, the book is an open window on a tragic era, but nevertheless very rich in events directed towards a story that has imposed itself on our collective memory under the title of Lebanese resistance.”

The reason behind “the Spirit of a People” being the concluding chapter of the book, says Daccache in the foreword, is the fact that the title associates the name of the President and Resistance fighter Bachir Gemayel with a philosophical concept, that of the Spirit of the People, which reveals itself as a proclamation of faith, because from that moment forth, the idea of the president, his history, the cause he supported, his personality and his stature, are welded together and form one entity with the entire Lebanese people who wish to restore the legitimacy of the State through the figure of an extraordinary president.

Message from Cardinal Béchara Boutros Raï, Maronite Patriarch of Antioch and all the East