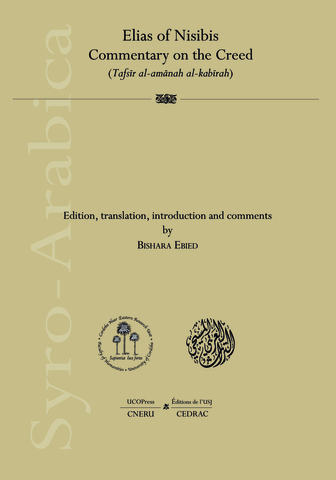 This book offers a critical edition and an English translation of the Commentary of the Creed (Tafsīr al-amānah al-kabīrah) written by Elias, the then-called Nestorian Metropolitan of Nisibis (975-1046 AD). In his Commentary, Elias quotes sections of the Syriac text of the Nicene-Constantinopolitan Creed which his Church, the Oriental Church, adopted. For each section, he gives an Arabic translation and a brief interpretation. The editor, Bishara Ebeid presents the life of Elias in its historical context and offers a comparative analysis of the Syriac and the Arabic versions of the Creed in his Commentary. He makes remarks and he argues about the biblical quotations the author made in his interpretations and provides a study of the main doctrines developed by Elias, such as the Trinitarian and Christological doctrines. Elias’s Commentary is to be considered as an exposition of his Church’s faith in a polemic and apologetic way. In fact, he defends his position regarding the doctrines of the two major Oriental Churches, the Melkites and the Jacobites, and also regarding Islam and its accusations against Christians concerning the Trinity and the dogma of the Incarnation, God the Word.