“The Jesuit school has always preached human values, sharing, and the support of others.” 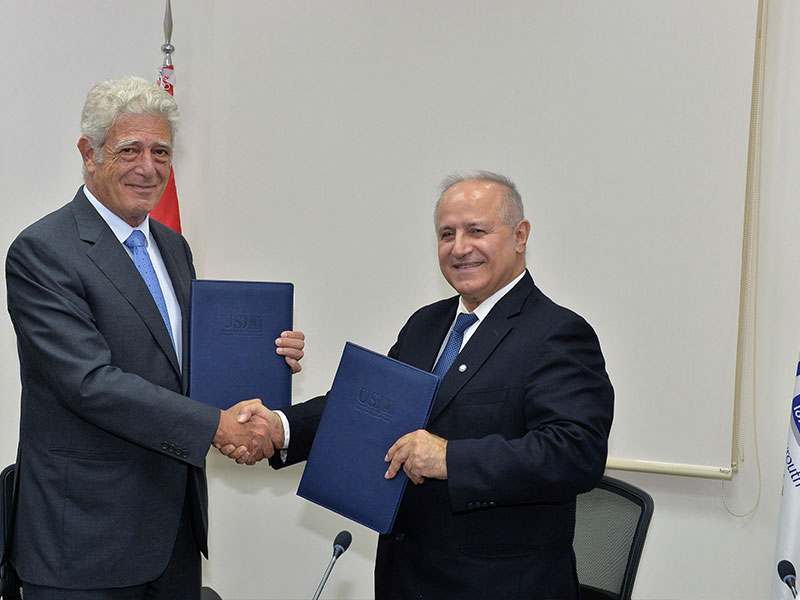 If it is by pure coincidence that the constitution of a new fund, the "Maurice Sehnaoui Fund", took place on July 31, feast of Saint Ignatius Loyola, founder of the Society of Jesus, those present the signing of this Fund took advantage of this coincidence to recall the Jesuits' primary mission, namely solidarity, the purpose of USJ Foundation.

This reminder of the Jesuit mission was included in the words in the speech of Antonio Ishac, President of the Faculty of Science (FS) Students’ Association and representative of the FS students: “The Jesuit school has always preached human values, sharing, and the support of others.” Speaking to the donor Maurice Sehnaoui, Antonio Ishac began by thanking him for this gesture, which “fits into these values and will forever embody an example to be followed by future generations. Your actions (...) come to remind us that in a country that sometimes seems uncertain and quite often problematic, there are men who never lose hope, who are ready to make investments not only in stone and material things but in their confreres and in our distinguished educational system at USJ.” The presence of student representatives at Fund constitution ceremonies is highly symbolic and brings an even more human character to these ceremonies, showing these grateful generations of students to the people who allow them to access quality education.

“The Jesuit school has always preached human values, sharing and support of others.” Speaking to donor Mr Maurice Sehnaoui, Mr Antonio Ishac began by thanking him for this gesture, which "fits in with these values and which will forever embody a model to follow for future generations.

The Sehnaoui Fund can now be listed among the multitude of funds already established at USJ, “thanks to alumni, friends of USJ, and philanthropists such as Maurice Sehnaoui who still believe that higher education is a social lift, allowing lebanese families to help Lebanon grow,” as stated by the Foundation Secretary-General, Mrs Carmel Wakim, during the ceremony.

After retracing Mr Sehnaoui’s career, Rector Salim Daccache thanked him for his generosity, pointing out that with the creation of this fund, Mr Sehnaoui has helped “the university  move towards the creation of its own endowment and give to solidarity its full meaning: that of giving without counting, for the sake of raising and helping young people grow with knowledge. USJ offers thousands of scholarships every year which relies on its alumni and friends to progress.”