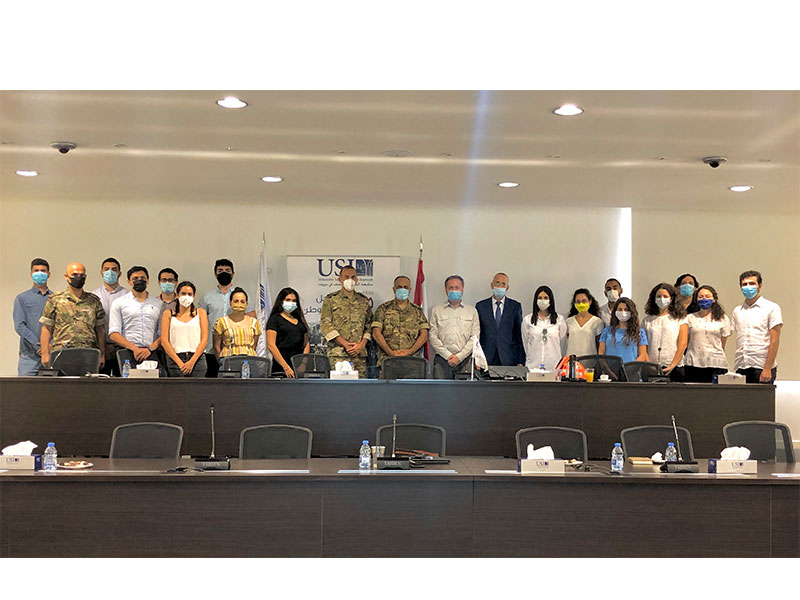 Within the framework of the cooperation with the Lebanese Army to explore the damages caused by the Beirut port explosion (August 4, 2020), the School of Engineering in Beirut (ESIB) of the Saint-Joseph University (USJ) hosted the French-Swiss engineer and international site expert Emmanuel Durand, who presented the laser powered scanner used in the inspection of the Mar Mikhael neighborhood, in which Durand participated with a team of 16 student volunteers from ESIB.

The event was held at the Campus of Innovation and Sports (CIS) in the presence of the head of the Advanced Emergency Chamber in Beirut, Brigadier General Sami Al-Howayek, joined by a group of officers, and the rector of USJ, Professor Salim Daccache s.j., who thanked the military institution for all the sacrifices and rescue efforts undertaken, saying that “there is hope, because there is solidarity among us”.

Professor Wassim Raphaël, Dean of the Faculty of Engineering (FI) and host of this event, greeted the attendees, including the engineer and international site expert Emmanuel Durand, who came to Lebanon despite all the risks and challenges to share his expertise with the students by providing valuable training. He then thanked General Al-Howayek for his assistance during the works, as well as the field officers who accompanied the team's work and delivered all the necessary support under the direst circumstances. He then thanked the students for their efforts, commitment, discipline and generosity.

Brigadier General Al-Howayek acknowledged the words of welcome and turned to the audience by saying, “What you are doing is very important,” noting that “the time factor is very stressful in such circumstances,” and thanked the students by saying, “The youth give us strength!”

Engineer Emmanuel Durand, for his part, reviewed his scientific and practical experience and his work on a 3D scanner that measures distance, temperature and light intensity, that tracks movement, and that takes 3D and infrared images. Durand is also specialized in silo construction. He introduced modern technologies used nowadays to build them.

Durand then explained the use of this 3D laser scanner, particularly in Mar Mikhael's building, and displayed images from inside the building, since this device allows to digitize it without having to enter it, nor exposing the rescuers or engineers to any danger, because all measurements can be done from images and computer programs. He also showed images of the Sursock Palace and Museum and other endangered archaeological buildings in Beirut and gave an example of the effectiveness of the device as it was used in the restoration of the ceiling of Notre Dame Cathedral in Paris after its exposure to fire.

He also talked about the benefits that students gain from training on this device, the importance of speeding up surveys, especially of older buildings, and the possibility of publishing accurate documents on the condition of each building. Durand focused on the shape of the device, its light weight, small size and practicality. It only needs a 10 cm hole to access a destroyed building, which makes it very flexible, as it is mounted on a tripod and can be used for hours on end.

In wrapping up his presentation, Durand praised USJ for its exceptional academic performance, saying, “You can be proud of your students.”