Carmel Ghafari Wakim: 36 Years of Service to the University and its Students 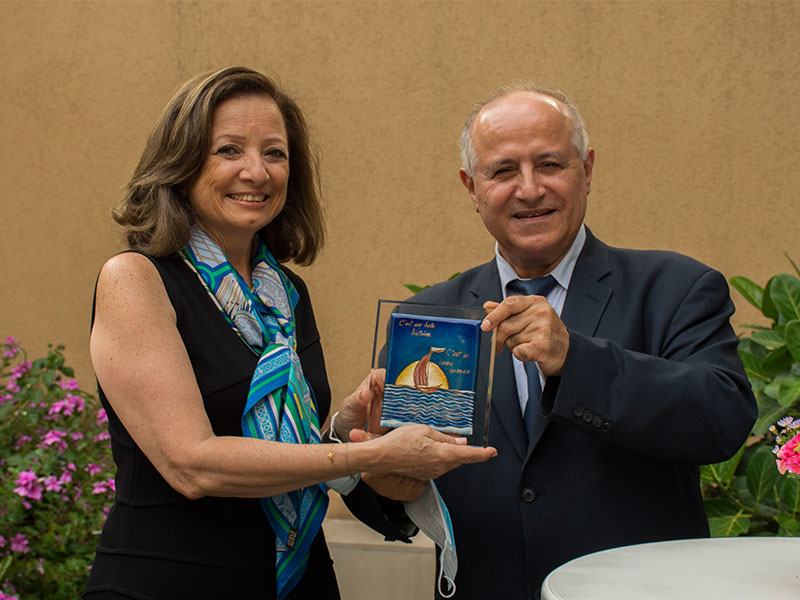 On Wednesday, July 29, 2020, during a friendly ceremony, a tribute was paid to Mrs. Carmel Wakim, in the gardens of the Rectorate of the University.

In the presence of and around Carmel, the Rector and Vice-Rectors of the University, Carmel’s family, close friends and colleagues gathered to pay tribute, express thanks and appreciation to the woman whose name has been associated with USJ for more than 35 years.

“She was moving towards this Jesuit institution from which she could no longer detach herself, and it was a mutual one.” Pronounced by Professor Salim Daccache, rector of USJ, during the July 29 ceremony, this sentence sums up the strong bond that united USJ and Carmel Wakim for many years.

These 36 years, filled with hopes, accomplishments, joys and sometimes even disappointments, have witnessed many achievements whose focus and purpose were the students and their well-being. Director of the Department of Social Services at the University from 1984 to 2014, and Secretary General of the USJ Foundation from 2015 to 2020, which she founded and nurtured, Carmel Wakim has, throughout her career, fulfilled and lived her passion for social issues on a daily basis.

The Story Begins with the Department of Social Services

Who doesn’t know Mrs. Wakim? The woman who, with firmness but with great tenderness, carried loud and clear the cause of students in difficult financial situations or facing problems, who always worked to ensure that Saint Joseph University of Beirut remained accessible to all, for whom the well-being of the student was paramount, and who always ensured, with diligence and fairness, the help, support and guidance that students needed.

“There may be students who don’t join USJ because they don’t have the financial means, but we can’t imagine anyone leaving because of that,” said the former director of Department of Social Services.

Carmel Wakim’s adventure at USJ began in 1984 with the creation of the Department of Social Services. It was under the impetus of Fathers Jean Ducruet and René Chamussy, who were respectively rector and director of the university’s Department of Information and Student Orientation at the time, that the Department of Social Services came into being. A year later, under the direction of Carmel Wakim, USJ was active in three places of social distress: at the Dbayeh camp, where student volunteers provided monitored studies, at Karm el-Zeitoun and then Uruguay Street. In the latter, a small school located between Gemmayzeh and Mar Maroun, children from very disadvantaged neighborhoods met.

“We have made non-discrimination our motto, and that reflects on the image of USJ as a whole. The work of the Department is essential; it creates a bond between the university and the students,” she said.

The two highlights of her 30 years as director of the Department of Social Services are the celebration of the 25 years of the Department, during which she celebrated “the passion for social work, that is to say, giving so that the good spreads, just like good wine spreads out full wineskins for everyone”, and the awarding of the ISO 9001:2008 certificate.

In 2015, when Carmel Wakim had expressed the wish to retire to devote herself to her family, Rector Salim Daccache had a different vision: he decided to entrust her with the task of managing a new structure that he had been thinking about and that was now a necessity: the USJ Foundation.

And who better than Carmel Wakim, who has always been the link between donors, students and the University, was in a better position to think, set up, implement and develop the USJ Foundation project.

It was a real challenge, but Carmel loved challenging tasks. Taking this project to heart, whose ultimate goal is the University but especially the youth so dear to her heart, she approached donors by emphasizing the purpose of the donation they would be giving: “Making a donation to the USJ Foundation is to support a high quality education open to all talents and to promote social and cultural diversity. It is to maintain USJ’s status as a regional and international university of reference in research and teaching.”

Speaking about Carmel’s journey within the USJ Foundation, Professor Daccache notes that she “took up the challenge to contribute substantially to the foundation of the USJ Foundation family whose ultimate goal is to raise funds primarily for the students, our raison d’être and for the development of the University as an academic project at the service of Lebanon.”

Speaking to Carmel during the July 29 ceremony, he said: “I think that the USJ Foundation that you have nurtured for five years is the heir to the social passion of USJ because what is done and undertaken there in terms of fundraising is a more modern and more systematic form of expression, ever more dynamic, of this passion for social issues, based today on advanced technologies and powerful tools of concerted action to collect scholarships, contribute to the development of the University’s infrastructure in an increasingly competitive world and today in the midst of an economic and health crisis.”

“I am in awe of how you have been helped in this task, relying on the team and creating an ecosystem of good, committed work. In all this, you have not lost the social fiber by being close to all donors and especially to seniors like Sami Turqui and the Mechaalanis and you have not lost the sense of purpose of the Foundation, especially for USJ, but also for HDF, which is none other than the successful fundraising since today we can say that there is an endowment for USJ on which we can build the sustainability of the fundraising policy in the future.”

Carmel Wakim is retiring so that she can finally devote herself full-time to her family. USJ without Carmel Wakim and Carmel Wakim without USJ? It is quite hard to imagine... In fact, the Rector was keen to point this out: “There are spells cast here and there in this world, and your fate is to remain glued to USJ, your existence cannot be separated from it. Even in your retreat, while taking care of your grandchildren, you will know how to be a good advisor to the Rector in order to continue to build our passion for God and for people, in other words to spread love and work for the salvation of many who need our supportive and benevolent gaze.

Carmel Wakim, your silence echoes from all the actions you have accomplished. The students who are grateful to you speak for you, about you. These same students, who one day, thanks to your silent action, were able to graduate, are going to the USJ Foundation to make donations and to help young people who are going through the same difficulties they have experienced.