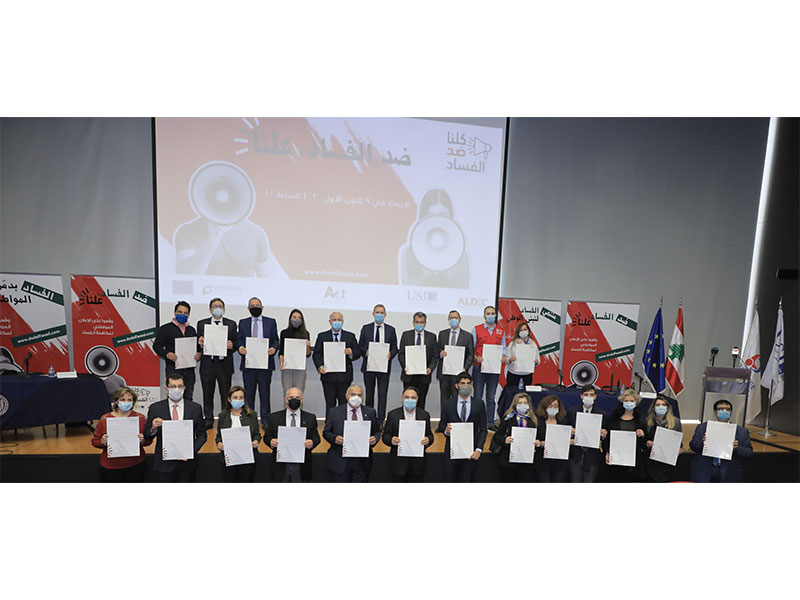 Under the name of “Dodelfasad”, or “Against Corruption”, the Saint Joseph University of Beirut (USJ) and ALDIC (Lebanese Association for Taxpayers' Rights and Interests) have launched a national campaign during a press conference held on December 9, the International Anti-Corruption Day. The campaign is funded by the European Union and falls under ACT - Anti-corruption and Transparency Project, implemented by Expertise France. It will bring together Lebanese civil society, the private sector, and individuals holding public positions to fight corruption and ensure transparency and access to information.

The ultimate goal of these joint efforts is to create an anti-corruption movement, fair and equal market conditions for all actors and to eliminate the temptations of corruption for all.

The campaign focuses on youth’s participation as a main factor in change. Students from USJ have been extensively trained to lead on the campaign activities. They will be an integral part of the following activities:

- Signature of the Anti-Corruption Declaration developed by experts (available at www.dodelfasad.com). USJ students will visit several public figures and organizations to convince them to sign the Declaration

- National communication campaign to urge citizens to sign the Declaration

- Conferences in the main universities involving youth from all over Lebanon

- Launch of an anti-corruption educational tutorial for the private sector

The press conference to launch the campaign took place at USJ and was presented by Pr. Salim Daccache s.j. rector of USJ, Mr. Rein Nieland, head of section at the European Union delegation in Lebanon, Ms Lilly Formaeloni from Expertise France and Me Karim Daher, President of ALDIC.

P. Daccache said that “with this project, the USJ wants to launch a vast movement to fight corruption, it's our way to participate in the recovery of our country, this recovery can only come from the bottom up. USJ students will have an important role to play in achieving our goals.”

Mr. Rein Nieland said that: “It is essential for Lebanon to overcome this challenging crisis by pressing ahead credible reforms. Active participation of students, individuals and CSOs in the fight against corruption is key to mobilize sustained commitment to building a future where corrupt practices are not part of the normal way of life.”

Mrs. Lilly Formaleoni from Expertise France stated: “The ‘dod el fasad’ campaign is a call for action, an invitation to ask accountability collectively, irrespective of political opinions, ages or social backgrounds. It is a pledge for a better Lebanon, a bet on the future.”

Me Karim Daher said that “the project is a practical implementation of the slogan against corruption through a qualified and enthusiastic youth campaign for a better tomorrow.”

Through this awareness campaign, the Act project aims at raising awareness of the public and users of public services on issues of transparency and the fight against corruption. It aims to help restore trust between Lebanese citizens and their public administrations. This project tackles the issues of corruption and transparency by improving good governance in Lebanon.