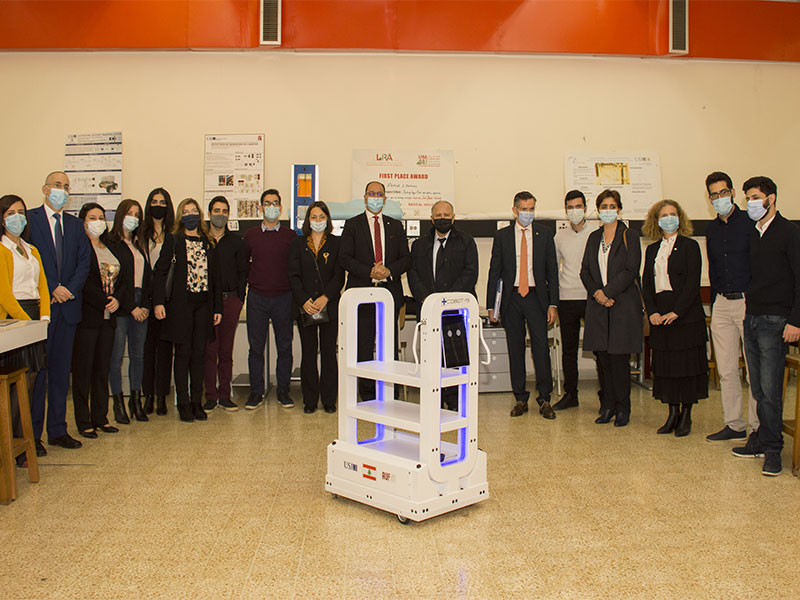 During his official visit to Lebanon, the Rector of the Francophone University Agency (AUF), Professor Slim Khalbous, met with Professor Salim Daccache s.j., Rector of Saint Joseph University of Beirut (USJ), Professor Wassim Raphaël, Dean of the Faculty of Engineering (FI), and the COBOT-19 and RAAD-19 project teams on December 7, 2020, at the Campus of Science and Technology (CST) of USJ in Mar Roukoz.

In his welcoming address, Professor Salim Daccache, traced back the prestigious past of the School of Engineering in Beirut (ESIB) and its current successes, among which earning the American ABET Accreditation. “It is a joy to welcome you,” added the Rector of USJ in his address to Professor Khalbous, “especially since this is your first mission to French-speaking universities in Lebanon. Thank you for having thought about Lebanon during these difficult times we are going through.”

Professor Slim Khalbous announced for his part that he was delighted to be at USJ, pointing out that it was the first French-speaking Lebanese university to join the AUF, as early as its establishment in 1961. He then evoked the details of the “AUF Plan for Lebanon”, launched in response to the serious economic crisis that weighs heavily on Lebanese universities. This plan, said the AUF Rector, has a value of more than one million euros. It is an exceptional mobilization of the first university network in the world, which is convinced of the need to “preserve the academic and scientific potential of Lebanon”, essential to “develop the skills and socio-professional qualifications” essential to the rise of the Country of the Cedars.

“This is the first time that the AUF has a dedicated plan for a country. We believe it is our role to stand by Lebanon in these difficult times. We are convinced of Lebanon’s major role in the French-speaking world and we are in solidarity with our dear friend Lebanon,” said Professor Khalbous.

As for Professor Wassim Raphael, Dean of the Faculty of Engineering, he thanked all the stakeholders of the AUF, of USJ, as well as Dr. Flavia Khatounian, who coordinated the work related to these projects throughout the whole process. He then congratulated the researchers for their audacity, echoing the words of the famous American philosopher John Dewey:

“Every great advance in science has issued from a new audacity of imagination.”

Introducing the COBOT-19 and the RAAD 19 projects

Following the spread of the novel coronavirus, the AUF has called on member universities to develop project proposals that could serve the public interest to be funded by the AUF. The AUF thus allocated one million euros to 92 university projects that it selected out of 2000 project proposals, including 4 from Lebanon and 2 from USJ, more specifically from ESIB: COBOT-19 and RAAD 19.

Durin the meeting, Dr. Jean Sawma, Dr. Gabriel Khoury, and engineering students Joe Karam, Alexandre Rabahieh, Rita Chamat and Marc Daou, presented the COBOT-19 project, whose aim is to reduce the contacts between healthcare personnel and Covid-19 patients. According to the team, the features of the robot are: delivery of food and medication to the patient, the possibility for a doctor or nurse to interact with the patient through a videoconference, the ability for healthcare personnel to obtain the patient’s medical data through a special application, self-cleaning and disinfection, the ability to automatically navigate and access the required room without any human control, a lighting system and the ability to open doors.

The students also mentioned that the project is still under development and is currently in the testing phase. They have succeeded in developing a user-friendly application that controls the robot in two modes: the user-controlled manual mode and the autonomous mode.

The disinfection system is a very important aspect, which the team wants to further improve. This is one of the goals of the RAAD 19 project, presented by Dr. Jihane Rahbany, Director of the Department of Chemical Engineering. This second project consists in developing an antiviral layer for personal protective equipment, in order to reduce the risks of propagation and contamination, and to ensure better protection for the most exposed people.

In order to be able to transition from prototyping to industrial production, a partnership has been forged between USJ and INDEVCO Group. In addition to the antiviral layer, the team also decided to prepare an antimicrobial material. After explaining the stages of the project, Jihane Rahbany, announced that she would be able to move on to the production of 1,200 suits in February, which will be distributed to hospital staff and Red Cross volunteers.

Regarding the similarity with the COBOT-19 project, Dr. Rahbany felt that the antimicrobial layer developed, could be sprayed or painted on the surface of the robot so as to make it self-disinfecting.

The event wrapped up with a visit to the laboratory for a close observation of the COBOT-19 robot.