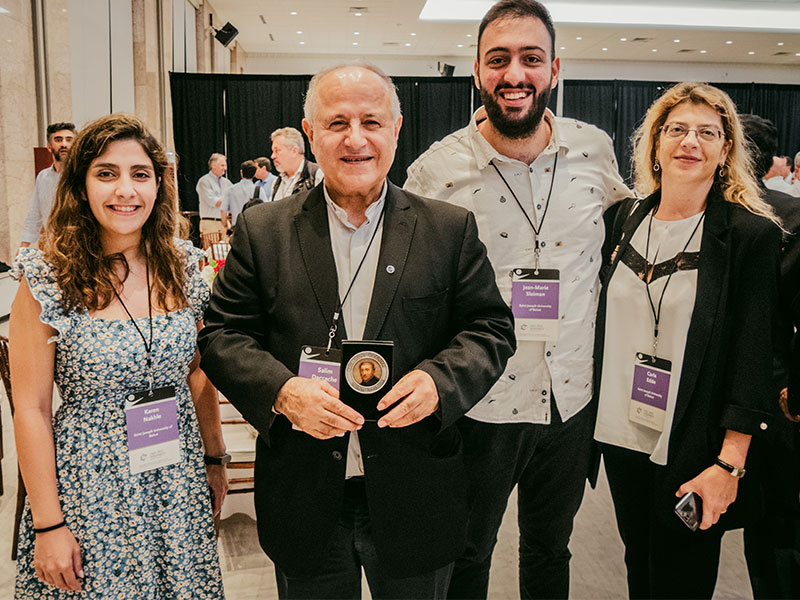 The International Association for Jesuit Universities (IAJU), bringing together more than 200 Jesuit universities and institutes of higher education from around the world, awarded the Peter Canisius Medal to Father Salim Daccache s.j., Rector of Saint Joseph University of Beirut (USJ), at its international assembly that was held from August 3 to August 6, 2022, at Boston College in Massachusetts, USA.

This medal, awarded periodically to an outstanding individual in the community who has made substantial contributions to the educational, spiritual, social, cultural and intellectual advancement of mankind; and one whose career and achievements constitute a challenge and inspiration to American youth, was awarded to Father Daccache by the Superior General of the Society Jesus, Father Arturo Sosa s.j., at the closing ceremony of the IAJU.

Father Philp Geister s.j., President of the KIRCHER Network, stated the reasons why Father Daccache was selected to be a recipient of this presitigious medal. “[We] wish to honor Fr. Salim Daccache, Rector of Saint Joseph University of Beirut Lebanon for his extraordinary accomplishments at Saint Joseph University duringthe last 10 years. Despite the devastation in Beirut and the collapse of the economy, Fr. Daccache has heartily and courageously maintained a positive spirit by prayer and sheer willpower has kept both University Hospital and the University running.”

“His efforts went far: helping with the rehabilitation of damaged houses, supplying hygienic kits and medicine, as well as tending to the victims’ mental health. Immediately following the explosion, he launched a humanitarian mission to insure that the University Hospital Emergency Room could recover from the blast and assist victims in critical condition. […] Fr. Daccache and his team committed to reconstruct campus infrastructure that most recently restored the famous Oriental Library.”

“As you might expect, Fr. Daccache is well recognized and well respected in Lebanon and abroad. Recently, he was unanimously elected president of the Universities Association of Lebanon and received the National Order of the Legion of Honor from the French republic for his commitment to higher education. With his dedicated team of staff and senior administrators, Fr. Daccache hopes to continue meeting the needs of students whose futures would otherwise be bleak,” concluded Father Geister, thanking Father Daccache again for his remarkable achievements and commending him for his service to Jesuit higher education.