Inauguration of the Korean Corner at FdLT 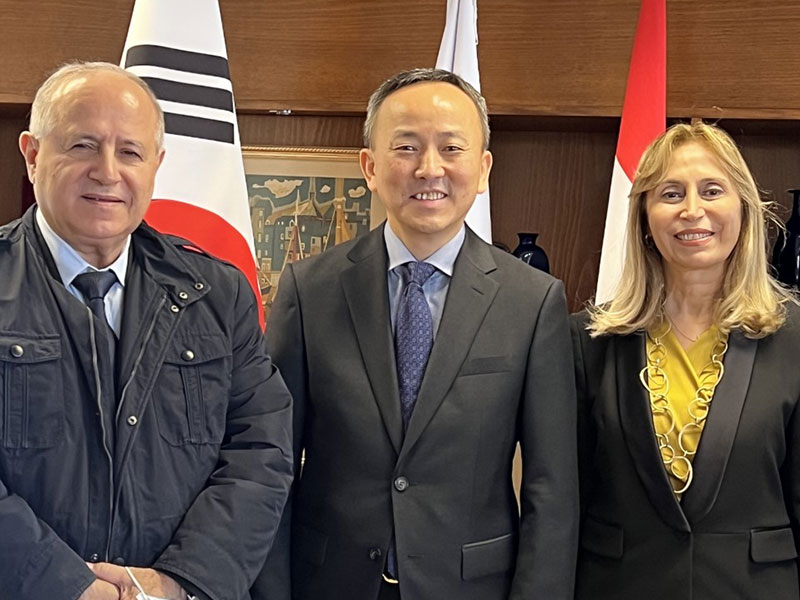 On Tuesday, November 29, a Korean Corner was inaugurated at the Faculty of Languages and Translation (FdLT) of Saint Joseph University of Beirut (USJ) in the presence of the Ambassador of the Republic of Korea H.E. Mr. Il Park, the Rector of USJ, Professor Salim Daccache s.j. and Professor Gina Abou Fadel Saad, Dean of the Faculty of Languages and Translation and Director of the School of Translators and Interpreters of Beirut (ETIB).

“Our relationship with Korea began in 2018 when Ms. Carole Verne, who was Vice Dean of the USJ Faculty of Management and had connections with the Korean Foundation, suggested that we introduce teaching Korean to our students,” Professor Saad said. She added: “Given the economic and cultural importance of the Republic of Korea, our Rector, Prof. Daccache thought it was an excellent idea. Ever since, we have been teaching Korean, and we never miss an opportunity to open our students to the country’s culture. Today, with the inauguration of the Korean Corner, our students and the general public will be able to discover books, DVDs and other aspects of this rich culture.”

H.E Il Park delivered a speech on the “Factors behind Korea’s economic success”. He explained that transparent execution of state-led economic development plans, the success of the resident engagement policy, the export conglomerate policy, the talent development policy, and the good work ethic are the five key factors that contribute to this success. He further stated to the attendees that, “the new generation is the future of a country. It is heartbreaking to witness mass emigration like in Lebanon. In Korea, in the early days of economic development, many young people emigrated to the United States and Europe to study, but nearly 90% of them returned to put their education and talent into use and contribute to the economic development of the country. I know that Lebanon is going through a period of multiple challenges, but if the leadership and the government can ensure the stability of the country and create opportunities and a proper working environment, I am sure that the youth will return.”