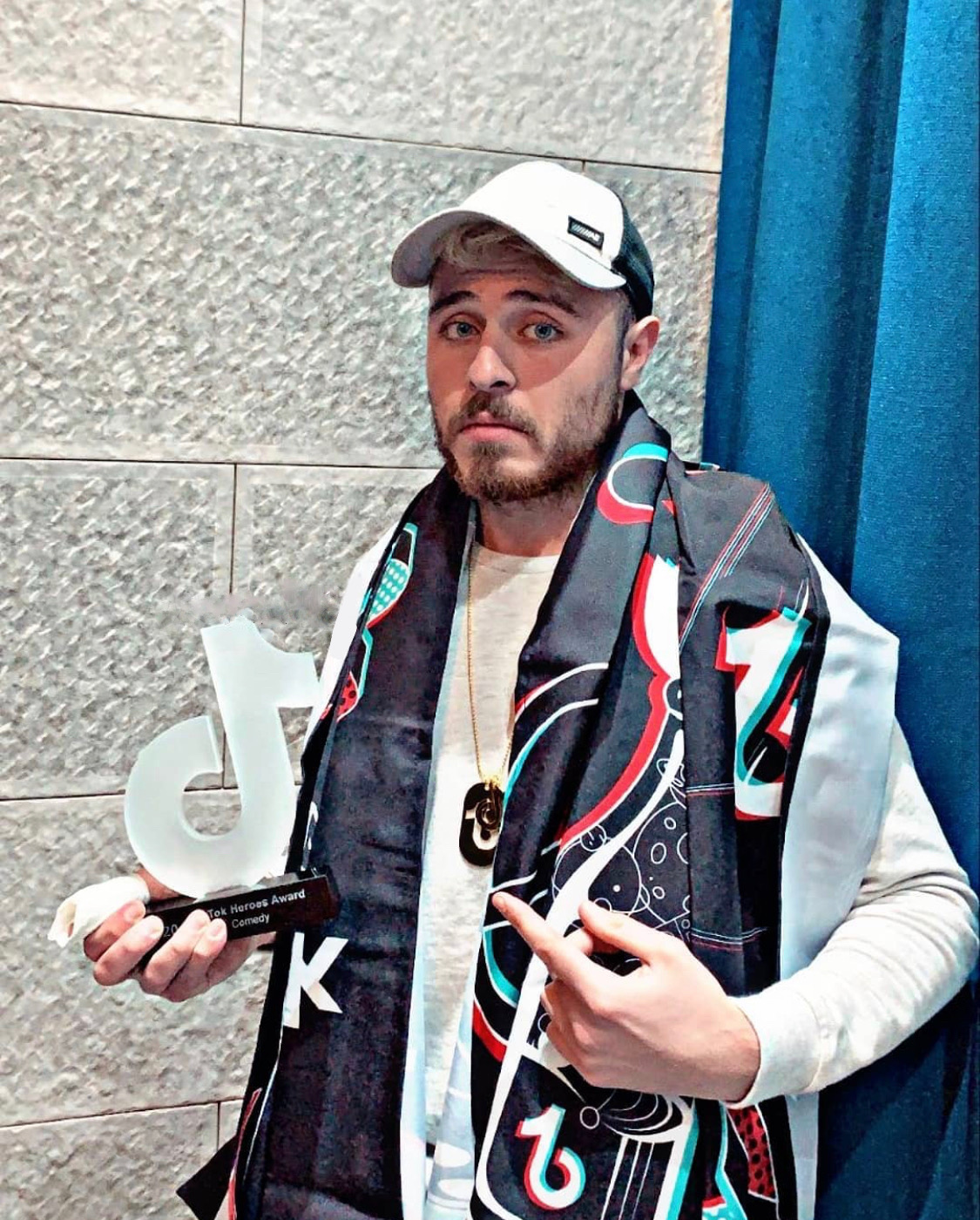 Ramy Hamdan, a young 21 years old Lebanese studying “Business and management” at LIU is a successful and well-known social media content creator in Lebanon and the Arab world and is the winner of “the best comedy content creator in the Middle East”, tiktok award – 2020.

In fact, Ramy is active on many social media platforms at the same time, Instagram (@ramyhamdan, 80K followers) Tiktok (ramyhamdann, +582K followers and +12M likes, verified), YouTube (Ramy Hamdan, +76.3K subscribers and +110K views), and newly on Starzly (Ramy is one of the public figures we can choose to film a video especially for us) and Baaz (a new application in the Arab world, a platform on which he posts videos).

Did Ramy always want to become a social media influencer and content creator? Apparently, he had a different dream: “few years ago, my main goal was to become a professional football player. I really worked hard on my self; practiced a lot and signed with two very big Lebanese football clubs. However, I reached a point where I was very overwhelmed and I was hardly managing my time between my studies, my job and football. I had to let go of one of them. Even though it was a very hard decision to make, I chose to let go of football, my hobby and sort of my dream at the time, because I couldn’t quit my job and refused to stop my education, especially that, unfortunately, being a footballer in Lebanon doesn’t have a big future and doesn’t make enough money for a living. This decision was very hard for me; football and sports were a huge part of my life back then”.

Known for his short funny videos that often go viral, Ramy tells us how he took his first step: “ I used to watch vines a lot and asked myself why no one in Lebanon posts similar videos, the majority of Lebanese comedy videos last longer than two minutes, so I decided to start filming short funny 10 to 15 seconds videos and transmit my message to everyone in few seconds only.

I filmed my first video without knowing that it will go viral all over the Internet, people loved my content, this is what pushed me and is always pushing me to film more videos and put more time and effort”.

What about the difficulties Ramy faced? And how did he overcome these difficulties?
“Everyone faces difficulties. Success never comes easily.
I was very influenced by what people say. Every negative feedback used to affect me. I am honestly surprised and never expected to achieve what I have achieved without being affected by criticism.

The confinement really helped me to start my carrier in this field. I used to film my videos, post them, and didn’t go out with my friends to see their reaction and hear their feedbacks or potential criticism.
I think that without the confinement in Lebanon, I would have never dared to start filming and posting videos on social media.
Today, after over a year since I started, I have become more familiar with this field, the country has re-opened, and I am no longer influenced by any negative feedback I get.

The only person who helped me overcome the difficulties I faced was my mom. She always used to help me in my videos, whenever I needed an additional person to act with me or to film me; she helped me with every detail. In the confinement period, I had no one else by my side.
All her technical help aside, my mom always supported my work, pushed me to make my first step, and still supports me in every step I make”.

Ramy has three messages to everyone trying to start a carrier in the social media field and film videos similar to his:
“Do something you love, you are definitely going to succeed and money will come to you. Don’t chase money. Also, not everyone who wants to get views has to film comedy videos. Comedy isn’t the key to success on social media, you have to love your content and be talented so people will love it too. I once watched a video on tiktok in which a man shares facts and information he knows, I really loved his content, he was showing the world his own talent and he succeeded. Just by presenting something you love, people will love it and will support you.

People don’t talk about people who don’t win. This sentence helped me to stop being affected by negative feedbacks. In the end, if you aren’t successful, nobody’s going to talk about you, so you know you are successful whenever people start talking.

And lastly, never imitate anyone. Create your own content, have your own ideas, and film your own videos. Stay authentic.
Also, avoid saying bad words in your videos and avoid talking about politics, this way everyone will be able to watch your videos without any age or political limit. Even though videos including cursing and bad words get a lot more views, I always avoid them and never say any bad word in any of my videos, I advise you to do the same”.

Ramy is ready to help everyone who wants to enter the social media field and start filming videos: “I have no problem helping and I ask anyone who needs my help to contact me anytime on instagram”.