Launch of the #FiersDeLettres Scholarship Fund 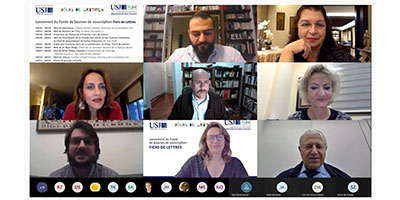 Aiming to contribute to the advancement of higher education by providing financial aid to students, in particular to those enrolled in the Department of French Literature at the Faculty of Humanities (FLSH), Mr. Karl Akiki, Head of Department and Vice-Dean of FLSH, has established a scholarship fund called “#FiersDeLettres”, in order to gather all the donations earmarked for this field of study. USJ Rector Prof. Salim Daccache s.j. formally announced this scholarship fund during a ceremony organized by the USJ Foundation, which was held online on Friday April 9, 2021.

Following the generous support of Mr. Bernard Fattal and the concert organized by Bemo Bank and Father Gabriel Khairallah, many donors came on board: Mr. Nabil Kettaneh, Mrs. Thérèse Irani el-Hage and Banque Libano-française, as well as other anonymous donors. In order to support the fund, webinars on cultural topics were held with the support of Mr. Ali Ezzeddine and Mr. Stéphane Tellier (“4 Generations 4 education”). Ms. Nidal Haddad also designed a collective book entitled “Maman douceur”. Book proceeds will be used to nourish the fund. The beneficiaries of #FiersDeLettres will be selected by the Department of Social Services at USJ, in close collaboration with the Department of French Literature, based on both academic and social criteria.

During the virtual launching ceremony, and after a word of welcome by Mrs. Cynthia Ghobril Andrea, Director of the USJ Foundation, Prof. Salim Daccache said that “the Department of French Literature carries the mission of the University that will never abandon the French-speaking world, which is at the core of its character and nature.”

“The dynamics behind a campaign like #FiersDeLettres, adds USJ Rector, bring to life our mission to serve a multilingual Lebanon, open to the cultures of the world. Today's Francophonie is not an imported concept but part of our Lebanese nature that the University continues to strengthen.”

“With all the upheavals that this annus horribilis has witnessed, it was necessary to convey a message of hope to the students,” says Karl Akiki. “Businessman Bertrand Fattal, who is also a literature scholar, was the first to embark on this adventure as he is an alumnus of the Department.”

He also added that generous contributors have followed. This Fund has thus been able to grow and to run out at the same time, since the number of students in dire financial straits is high. With this little push, young Lebanese men and women are no longer giving up and are pursuing their education for the excellence of the nation, even if the latter term is nowadays in jeopardy, Akiki insists. “With this support, he continues, it is the French-speaking, Francophile and Francophilia face of Lebanon that will be able to survive, since, let's not deny it, the Department of French Literature is the provider of the best French and French literature instructors in Beirut, as well as in the South and North campuses where the Department also operates.”

Riad Obeji, Managing Director of Banque Bemo, expressed his pride in supporting this initiative, and judged that “the importance of literature in life is underestimated, because of the obsession with immediate efficiency.”

This altruistic, voluntaristic and generous spirit is also shared by publisher Nidale Haddad. She said, “My publishing house Calima has allowed me to share my commitment to a cause: my love for a country that is not allowed to rest. Lebanon is a worn-out country, in search of winds of change, to restart on sound foundations and regain its special identity. My books are an act of solidarity towards a nation that does not give up, a declaration of love to a city with a distorted face.”

“The idea for “Maman douceur” came about around Christmas, says Haddad. My daughter Aida, a French literature student, told me that the financial situation of several students was worrying. In these times of crisis and pandemic, a charitable project, whose matrix will be the Calima Publishing House, becomes more than a necessity: it is an obvious and urgent one!”

Haddad added, “So I got in touch with Karl Akiki who suggested that I launch a project as part of the #FiersDeLettres campaign. So the idea for “Maman douceur”, a collection of “words and flavors”, started to come together, and would result in a special book featuring 48 entries and 23 sweet recipes. Professors from the Department [of French Literature], students, members of writing workshops and book clubs, writers, doctors, journalists, chefs, and food enthusiasts all worked together to create a book that would reflect the image of the nurturing mother, both for the mind and for the body!”

This new scholarship fund is now at the disposal of French literature students. It will meet any financial need with discretion and humility, while maintaining its motto: #FiersDeLettres.