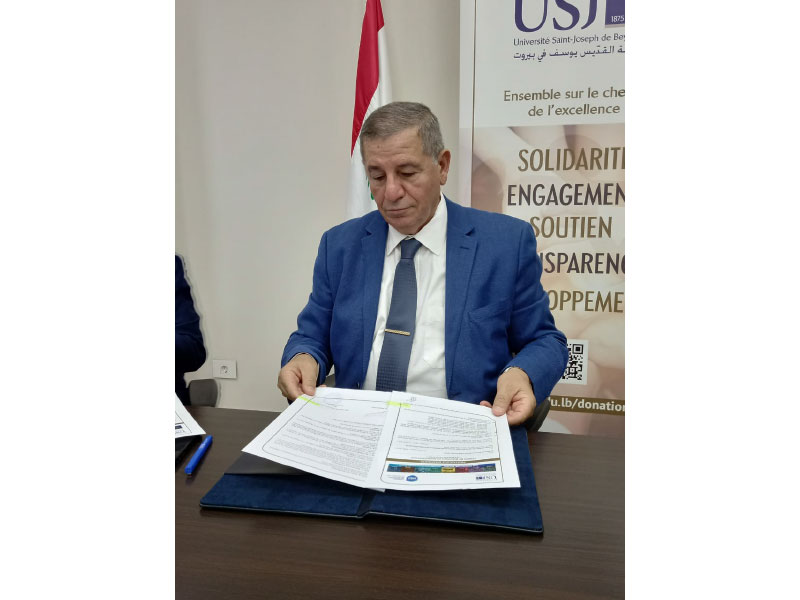 The Semaan family actively pursues its generous work in supporting the advancement of higher education. After the construction of the “Maroun Semaan Conference Center” at the Campus of Science and Technology in Mar Roukoz, the Semaan Semaan Scholarship Fund was launched, within the framework of the fundraising campaign “Une promo, une bourse”, instigated by the Federation of Alumni Associations of USJ and the USJ Foundation.

The beneficiaries of the Fund will be selected among ESIB students, following a twofold academic and social criterion, from the list of candidates submitted by the Department of Social Services.

Mr. Semaan Semaan, engineer, ESIB 75 graduate and member of the Semaan Foundation Board of Directors, said in an interview that “in the face of the harsh conditions the country is going through, it is our duty to help. As for us, the alumni who have succeeded in their careers, we are happy to help students who are in need. In this context, the Alumni Association in Qatar seeks to encourage contributions to fundraising campaigns launched by USJ.”

Semaan continues, “The remarkable level of education in Lebanon has a long history. Therefore, we strive to preserve it and understand its needs and challenges. I advise students to pursue their studies seriously and diligently, to stand out, as USJ students and ESIB students in particular, and to preserve its glorious history.”

“I call on students not to be afraid to work abroad and to be ambassadors of academic excellence during this critical stage,” concludes Semaan.

It is worth recalling that USJ inaugurated the Maroun Semaan Conference Center at CST in 2017, covering a total area of approximately 2000m2, fully equipped and including a large reception hall, an ultra-modern conference room and two meeting rooms.

Mr. Semaan Semaan, brother of Mr. Maroun Semaan, delivered a speech during the inauguration ceremony, in which he assured that Semaan Foundation will carry on its mission, believing that knowledge and culture are the most precious weapons for human empowerment. Semaan Foundation is proud of its accomplishments which will always promote human values and contribute to the development of individuals which is the basis of all development.