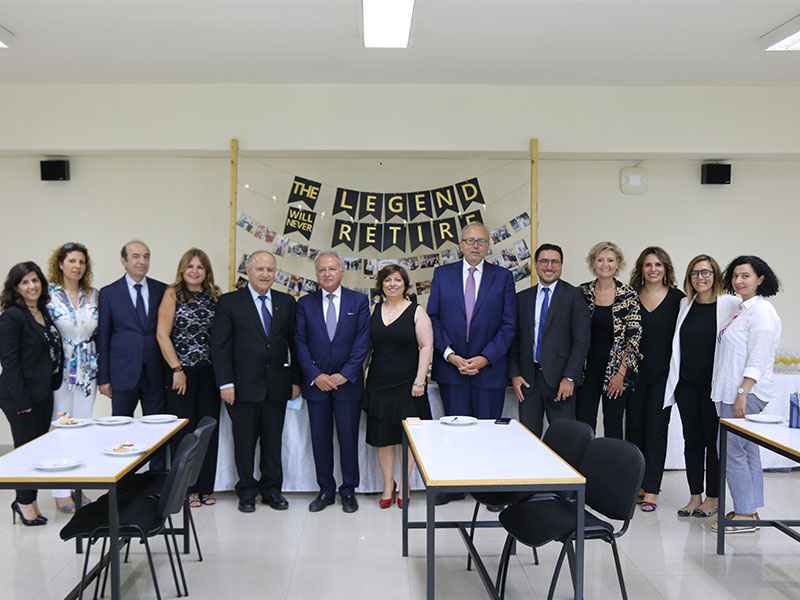 The families of Deloitte and Saint-Joseph University of Beirut (USJ) gathered on June 15, 2021 at the Faculty of Management and Business Administration (FGM) to celebrate the life, commitment and career of Joseph El Fadl. Following a warm and moving Naming Ceremony, Room 502 in Building C at the Campus of Social Sciences, now bears the name of Joseph El Fadl, FGM alumnus, long-time Managing Partner at Deloitte, member of the Governance Council of the USJ Foundation, and most recently, member of the Administrative Council of the Hotel-Dieu Hospital of France.

The director of the USJ Foundation said that this ceremony was indeed a surprise, and that it was organized in collaboration with a team from Deloitte, with the kind and gracious support of the USJ Rector, Prof. Salim Daccache s.j, the FGM Dean, Prof. Fouad Zmokhol, the Financial Department Director, Mr. Walid Mezher and the USJ Foundation team. She insisted on recalling in her speech, the importance of the discreet and active commitment of Joseph El Fadl, since he was “the first to have set an example and launched an Endowment Fund in Paris.”

Prof. Daccache states that “Mr. El Fadl’s spectacular career began at this Faculty, which has always been a great and promising faculty, training the top graduates in management in the image of Joseph the professional and friend. These two intertwined parts of his personality are mirrored in his astute assessments and recommendations, which have consistently demonstrated that he is a master at sea. Joseph is also here to breathe life into the institutions of which he is a part. I did not hesitate to wholeheartedly accept the Naming, for he is the strong man who hopes and gives hope to others, especially in these trying times, for me and entire generations.”

For his part, Prof. Fouad Zmokhol spoke of the importance of the room that now bears the name of Joseph El Fadl: “This room is significant in FGM history since it has hosted notable individuals as teachers and was the first, long before Covid, to be equipped with remote learning technologies. I gratefully and proudly accepted the Naming since it involves a person who embodies governance, transparency, ethics, and management. El Fadl and other FGM alumni are pillars of a great school and role models for our students and teachers.”

“It’s a pleasure to be here to honor a man who has had a significant impact on our lives,” says Deloitte Associate Director, Nada Maalouf. “I first met Joseph in 1993 at my job interview. I have had the privilege of working with him and getting to know him personally and professionally over the past 28 years, which have been filled with not just technical learning, but also great events and mentoring, since Joseph truly believes in building better people. He embodied the qualities of a true leader, inspiring people around him and pushing them to constantly do their best, and as a result, he is a timeless legend.”

In an emotional address to the audience, Joseph El Fadl noted that he has always regarded his education at USJ to be the basis for his successful career path. “I was called right after graduation by Tony Gbeily, a former FGM instructor, who offered me a position at a consulting firm,” he continued. “When I took the admission exam, I discovered certain errors in the questions, which sparked a discussion, but in the end, everyone was on my side. The CPA test in the United States is another example of such an education’s excellence. I believed that as a graduate of a French-speaking university, I would have a tough time passing the exam. However, when I approached the program, I found that it was far easier than the USJ curriculum. And, much to the amazement of the USJ team at Deloitte, I passed the CPA on the first try.”

He followed up by saying that he “will continue to support the Deloitte family, as well as the USJ and HDF families.”