Tomb to Class 2021: Take Destiny Back into Your Own Hands 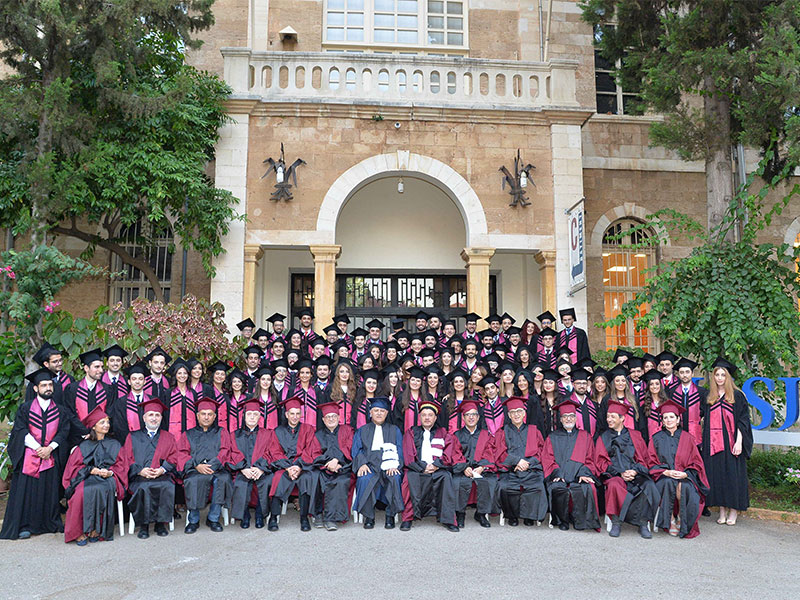 The graduating MDs of Class 2021 gathered for the last time at the Campus of Medical Sciences on Friday, July 2, 2021 to mark the end of a 7-year long journey.

In his opening remarks, Professor Salim Daccache s.j., Rector of the University, praised the success of the graduating class which, despite having lived through two tumultuous years in a country that has endured an endless series of crises, has demonstrated outstanding academic excellence, especially in terms of scientific research. “I bear witness that your diplomas are well-earned and well-deserved.”

He then addressed Lebanese youth immigration. He said: “The temptation to flee is all too real and presents itself as an alternative, but to whom should we leave this country? Our purpose now and forever is to keep our Lebanon in our hearts and minds, for our country represents our biological, moral and spiritual roots much like the cedar whose roots are buried in the earth and whose branches, nurtured by the roots, remain forever free and full of life.”

Then, Professor Roland Tomb, MD, PhD, Dean of the Faculty of Medicine (FM), touched on the same issue. He recalled an encounter with some of his students: “when speaking about Lebanon, they [FM students] referred to it as this country “هالبلد” with a hint of distaste,” said Tomb. “I asked them: If you were talking about your parents, would you have said these parents? They both observed a moment of silence and I continued, this country is my country, this is your country. You would never refer to your mother as this mother or your father as this father.”

In his speech, Tomb asked the soon-to-be practicing doctors to deal with the country as if it was a sick patient, with affection, care, love and reassurance. “Would we abandon it? Would we give up on what we love and those we love so easily?” He insisted that fleeing the country is a sign of cowardice, not one of bravery. Fleeing means giving up. Tomb urged the graduates to remember that Lebanon does not belong to the corrupted rulers, “it belongs to us. It is ours. How can we abandon what is ours?”

On behalf of her colleagues, Célina Doueihy thanked all FM professors who have accompanied the graduating class. She also promised to “be a strong example of determination and rigor, of knowledge and discipline through which the strength of hope will help us overcome all challenges that beset us.”

At the end of the ceremony, Nour Abdallah, class valedictorian, took the Hippocratic Oath.