Meeting with H.E. Michel Sleiman, President of the Lebanese Republic from 2008-2014

In a relaxed atmosphere, Sleiman shared with students the highlights of his presidency 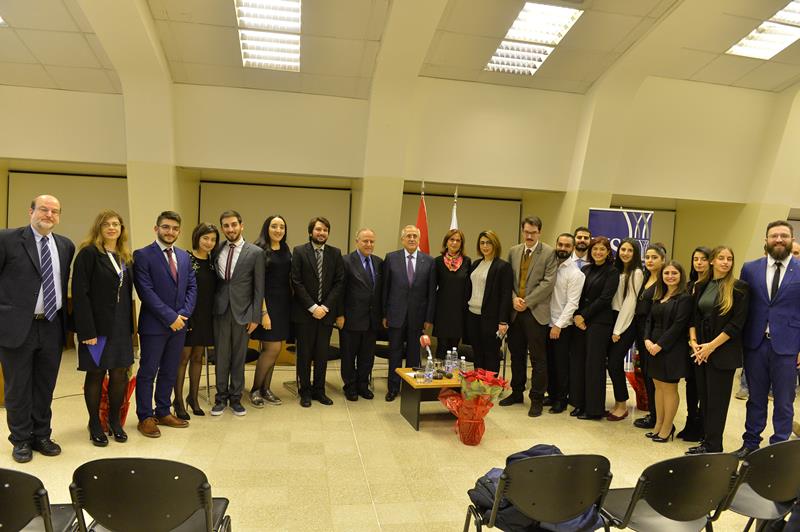 In a relaxed atmosphere, H.E. the President of the Lebanese Republic from 2008-2014, General Michel Sleiman, shared with students of the USJ Department of History- International Relations (Faculty of Literature and Humanities) the highlights of his presidency, in the presence of, notably, Prof. Salim Daccache, s.j., Rector of USJ, Prof. Christine Babikian Assaf, Dean of the Faculty of Literature and Humanities, Christian Taoutel, Head of the Department of History, MPs Nadim Gemayel, Imad Wakim, Eddy Abillama, and Jean Talouzian, and former Ministers Alice Chabtini, Nazem el-Khoury, and Sajaan Azzi. This process of sharing took place within a series of meetings held under the theme “24 hours in the life of”, launched by the Department of History.

Christian Taoutel began by thanking President Sleiman, “who did not hesitate for a moment to agree to inaugurate the series of meetings with public figures entitled ‘24 hours in the life of’, and who accepted to be interviewed by 15 students”. Mr. Taoutel paid homage to the memory of Gebran Tueni, “martyr of free speech and freedom, and all the martyrs who were assassinated”.

A photographic presentation retracing the main phases of the President’s life was then projected. An autobiographical note was also presented by the former President, in which he focused on his scientific and professional choices and the circumstances that led him to military school and to his degree in political science. He also tackled his 41-year military service up until his election to the presidency of the Republic.

“I made the Lebanese army into an army of the fatherland, an army of the people,” said the former commander of the Grande muette, “not an army of the regime. I acted out of conviction, particularly in the fight against terrorism, for the preservation of freedom of expression and humanitarian values, especially during the March 14 demonstrations.”

When discussing his time as President, he said, “I established diplomatic relations between Lebanon and Syria and made sure that Lebanon made its way back to the world stage, for it was the Syrian trusteeship that had been indirectly dictating our international relations. The Baabda Declaration transformed the National Charter into an international document capable of persuading decision-makers to create the International Assistance Group in Lebanon, with the goal of supporting our country politically, economically, and militarily. The National Defense Strategy has been presented, and I hasten to state that Lebanon must adopt it.”

“Lebanon’s position on the international scene,” continued President Sleiman, “considerably strengthened the economy. We reached a growth rate of 9.5% in 2010. We also consolidated the security forces (which allowed us to detect spy and terrorist networks), passed important laws, and strengthened the role of the judiciary. Several judges were dismissed, and we completed - for the first time - judicial trainings with no political interference.”

Addressing young students, he declared, “You must rebel against discrimination and frustration, engage in politics, demolish sectarian bastions. For my part, I ask that the voting age be lowered to 18, and I am proud to say that I had the honor of handing women ministerial responsibilities. But instead of witnessing progress on the issue of women’s representation quota, I’ve unfortunately noticed regression at this level.”

President Sleiman then answered the students’ questions, which ranged in nature from the personal, military, and presidential phases of his life to some decisions that he made.