Memorandum of Understanding to equip the USJ Archives Room 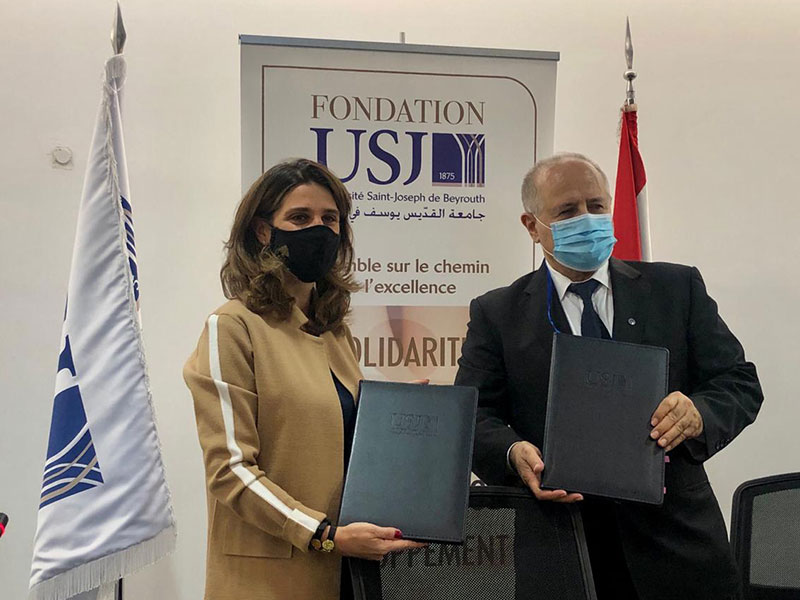 November 10: the birthday of Bachir Gemayel, the birthday of the Foundation that honors his name, also the anniversary of the Memorandum of Understanding signed for the establishment of the Bachir Gemayel Fund in 2015, and as of today, the date of the endowment of a donation to equip the Archives Room of Saint Joseph University of Beirut (USJ). A duty of remembrance, which the Bachir Gemayel Foundation has been able to translate into a beautiful act of solidarity, and “a theriac, according to Youmna Gemayel Zaccar, against the nationwide evils and ills of the present when the forces of evil are again and again destroying our dignity on a daily basis.”

The signing ceremony of the Memorandum of Understanding for this donation took place on November 10, 2020, at the Innovation and Sports Campus (CIS) of USJ, between the Bachir Gemayel Foundation, represented by Mrs. Youmna Gemayel Zaccar, and USJ, represented by its Rector, Prof. Salim Daccache s.j., in the presence of friends of the Gemayel family, and officials of the Foundation and USJ.

In her opening remarks, Mrs. Cynthia Ghobril Andrea, Director of the USJ Foundation, recalled that in 2018, Prof. Daccache appointed Dr. Christian Taoutel, Head of the Department of History and International Relations at the Faculty of Humanities, as curator of the USJ Archives, to lead the project of digitization and computerization of the historical and administrative archives of the University. These include manuscripts, maps, letters and photos that chronicle the history of USJ since its creation in 1875.

“Dr. Taoutel,” adds Mrs. Ghobril Andrea, “will lead a team of students who will be trained in the digitization of archives. This is an ambitious and long project that will take several years to complete, with the goal of preserving and safeguarding this wonderful heritage that is the USJ archives.”

In his speech, Prof. Salim Daccache expressed his joy to be gathered around the beautiful memory of Sheikh Bachir Gemayel. “What Dr. Taoutel was looking for,” added the Rector of USJ, “was not only funds, but the name of Sheikh Bachir, considered as the finest of the USJ Archives.” He also reminded that this is not the first project that was jointly developed between USJ and the Bachir Gemayel Foundation: “more than 20 years ago, a series of scholarships were awarded to students who today have a prominent place in both the Lebanese and international civil society.”

“In 2015, adds Prof. Daccache, a scholarship fund was created in order to perpetuate the tradition of educating young people in the spirit and values of the Bachir Gemayel Foundation. It is a pride for us,” he insists, “to host once again the name of Bachir Gemayel at the University which was, and still is, the University of Bachir Gemayel, as a symbol of national sovereignty, independence, regained Lebanese unity, fidelity, and transparency all of which we sorely lack nowadays.”

Youmna Bachir Gemayel, who is funding this donation with her husband Roger Max Zaccar, through the Bachir Gemayel Foundation, said that this “initiative is not nostalgic nor reminiscent. Nor is it sentimentalism, or the trap of an idealization that alters history. We stand together, both USJ and the Foundation,” she asserted, “conscious of the noble cause of honoring this memory. We are opting for a scientific approach to study, reinterpret, celebrate and convey it.”

“The current trend, adds the daughter of the assassinated President of the Republic of Lebanon, is perhaps to unveil statues and plaques. But we, the Foundation, in partnership with USJ, are advocating for the safeguarding and passing on of our heritage and memory; an ode to honor and convey this heritage, which is so rich for future generations. They will be called to fight back and to be resilient in these cursed times of uncertainty and despair.”

Prof. Daccache and Mrs. Gemayel Zaccar then signed the Memorandum of Understanding, and to wrap up the ceremony, the Rector presented the Director of the Bachir Gemayel Foundation with an autographed copy of “Portrait de l’USJ”, which outlines the history of Saint-Joseph University of Beirut.