Save Lyrics to Memory 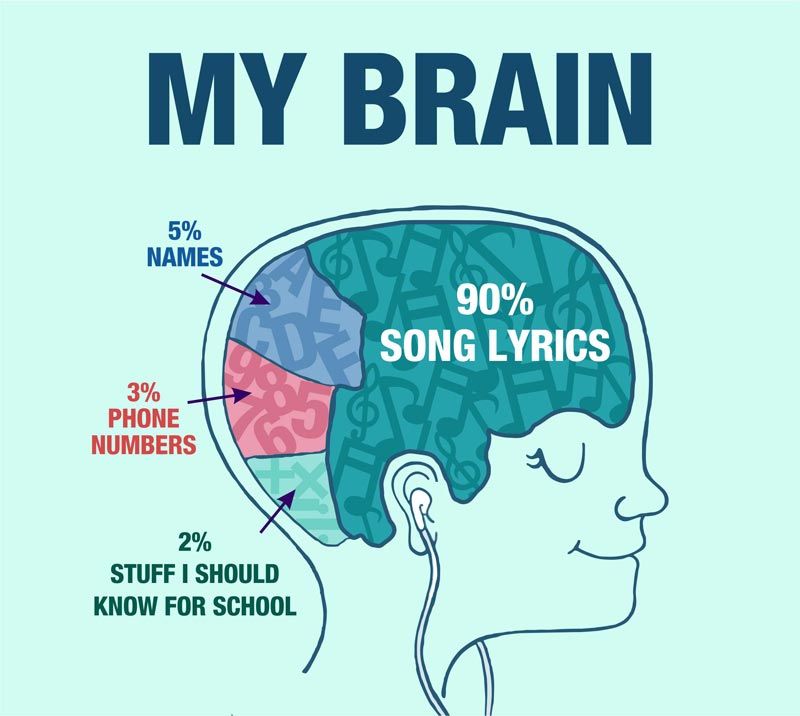 Do you know all the words to “As Long As You Love Me” by Backstreet Boys, but not a single word of what you studied about World War I for your upcoming test?

Yes, yes. We’ve all been there and asked ourselves the same question – “Why is it so easy to remember song lyrics, but not the notes we took in class?!”

First of all, there are four key factors that seem to contribute to remembering song lyrics, and they are the following: Repetition, Connections, Rhyme, and Pattern.

We recall song lyrics the same way we recall other things; by repetition. So, when you hear a song on the radio and like it,it is highly plausible that you will start  listening to it over and over again, making it very easy to remember its lyrics in the future.

Furthermore, brain connections play a role in why it’s easier to memorize certain things instead of others. When we learn something new, networks are formed in our brain as a way to retrieve and store information. Our brain can also more easily pinpoint information that has more associations. For instance, when you remember a song’s lyrics, you frequently also remember a particular voice, instrument, or characteristic sound. All these elements help us remember the words paired with them.

Although it can be hard to eliminate old memories, leaving less space available for new ones, it does not mean that it will  be impossible to store new information.

In fact, according to Northwestern University professor Paul Reber, there’s ample space available for memories, but “information that seems irrelevant when first learned, along with its lack of rhythm to follow for structure, tends to be forgotten”.

As Stephen Rao, Ph.D., says, “the more attractive something is to our attention, the more likely we are to remember it. Some lyrics may be more meaningful”.

Rhyme and Pattern, especially in music, also allow us to remember things. If you listen to rhymes in a song, it could be easy to predict part of the next line. Moreover, the pattern of the song can likewise help recall how the song goes. Allow me to explain: ‘pattern’ falls under ‘song structure’, which is basically the arrangement of different sections in a way that expresses the songwriter’s creativity, and it can be the one thing that distinguishes a timeless song from a track that can easily be forgotten.

The grandparent of all song structures is known as “ABABCB” or “Verse – Chorus – Verse – Chorus – Bridge – Chorus.” Many other structures were derived from this one, giving birth to lots of different songs, some of which we may wholeheartedly sing for as long as we live, and others we simply forget.

An experiment published in the Journal of Experimental Psychology: Learning, Memory, and Cognition showed that information was better memorized when sung in a song. There’s a reason why Mitchell Moffit and Gregory Brown of AsapSCIENCE wrote two entire songs – one about the Periodic Table and the other about muscle anatomy – to help students remember their information more easily!

And lastly, it is thanks to a strong combination of memory and emotions linked to a certain song that some tracks are just put before other information in our minds.

So, to recap, whether you are memorizing song lyrics or Krebs’ Cycle (don’t try, we’ve all failed), repetition is indeed crucial, and connections are also key. Notwithstanding, song lyrics appear to be easier to memorize than notes because, in addition to being played on-repeat, they often have rhymes and patterns – two elements that our notes don’t habitually have.