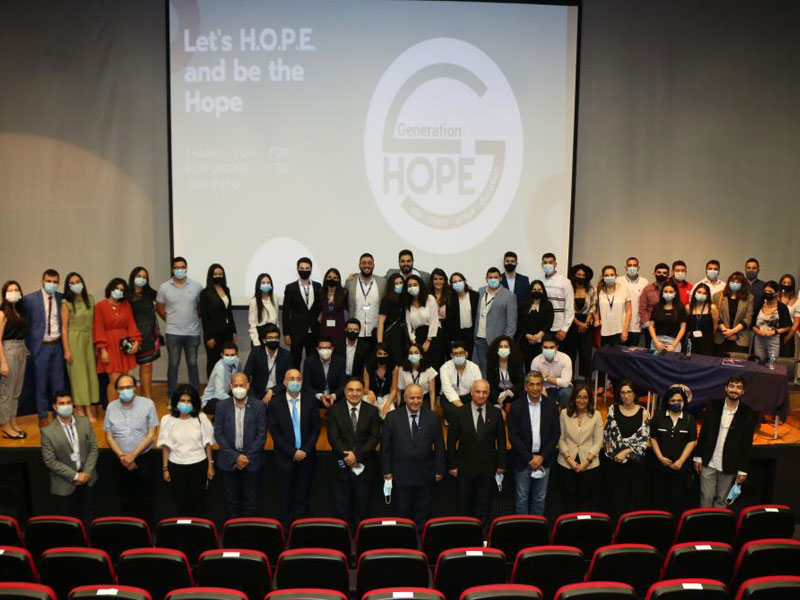 On May 31, 2021, the Department of Student Life (SVE) at Saint-Joseph University of Beirut (USJ) launched a student-led fundraising campaign called “Generation H.O.P.E: Help Others Pursue Education”. The Rector, Prof. Salim Daccache s.j., USJ Vice-Rectors, SVE Director, Deans, Directors and student representatives were present at the launch which took place at Auditorium François Bassil at the Campus of Innovation and Sports (CIS). All preventive measures were implemented to ensure the safe and smooth running of the event.

Maria Hage, host of the ceremony, cited Gibran Khalil Gibran in her opening speech. “As Gibran says, in every winter ‘s heart is a quivering spring, and behind the veil of each night is a shining dawn. This embodies the main goal of the campaign.”

In her speech, Gloria Abdo, SVE Director, praised the students for their effort and dedication, noting that they are “the hope for a better and brighter future”. She introduced the Generation H.O.P.E team members to the audience, and then thanked the Rector and all campaign partners for their unquavering and unmatched support to this initiative. She stressed that the academic journey of the students, who are mentored by SVE, is not only limited to academic knowledge, but also to the dissemination of the values of USJ.

The Steering Committee then took the stage to explain the goals of the campaign and how it works.

Michel Jarrache (Economics student, General Student Council member and Campaign Director), outlined the values of the campaign: solidarity, transparency, accountability, sustainability and citizenship. He added: “The challenging circumstances in the country, namely the economic, political, social and financial crises, the Coronavirus pandemic and the destruction wrought by the August 4 explosion, have pushed the students to join forces and support fellow students in dire need of financial support and their University, which also stood by them when it made the decision not to increase tuition fees.”

“The Jesuit family remains strong and united. This crisis is proof of solidarity by means of many initiatives, and this one will bring not only financial support to the students, but also moral support. It will also demonstrate the potential of students and their role in building Lebanon and its future,” concludes Jarrache.

She said, “the journey of a Saint-Joseph University student is more than just attending classes: everyone has a story and memories that get passed down over generations.” She wrapped up by displaying a preview of the campaign ‘s website, and she explained how to donate through GoFundMe or through the USJ Foundation and its authorized platform.

In turn, Céline Balaa, (Faculty of Economics Student Representatives Committee President, General Student Council member and Head of the Networking Committee) shared the data on which the campaign relied, and promised the donors to work with them in strict confidentiality, respect, transparency and accuracy.

As for Jean-Marie Sleiman (School of Engineering in Beirut student, General Student Council member and Head of the Marketing Committee), he explained the meaning behind the logo, the name, and the symbolic use of the color blue: “Blue is the color of the sky, and the sky is our only limit.” Touching on the marketing strategy of this campaign, he invited everyone to support it in terms of funding or advocacy, and concluded, “be ambassadors for our cause and our campaign.”

For his part, Prof. Daccache commended the students for their efforts and work, stressing that the campaign is “not just an arithmetic process, but also an act of faith.” He also reminded that the University is still supporting more than 46% of its students. The Rector echoed his pride in the students who have shown solidarity with their peers through this initiative.