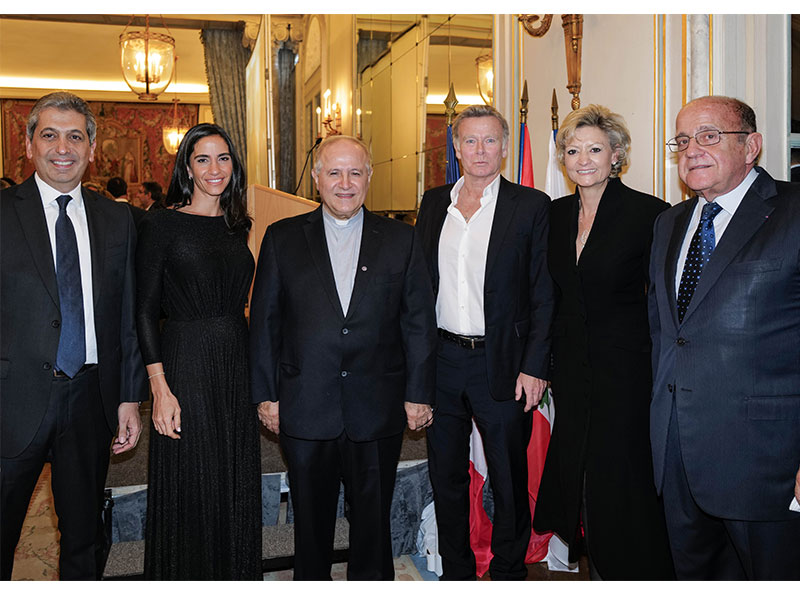 An USJ delegation, led by the Rector and including Mrs. Cynthia-Maria Ghobril Andrea, Director of the USJ Foundation, Prof. Christian Makary, President of the Federation of USJ Alumni Associations, Mr. Nassib Nasr, Director of Hôtel Dieu de France Hospital, and several Vice-Rectors and Deans of the University, is currently in France for a fundraising campaign and to meet with partners, French friends, and USJ Alumni. Several activities will take place along this journey, which will last until December 7, 2021.

Some highlights from the first leg of this journey.

In the presence of USJ Rector, Prof. Salim Daccache s.j., the President of the Federation of USJ Alumni Associations, Prof. Christian Makary, the President of the USJ Alumni Association in France, Mrs. Amale Sayah, the Director of the USJ Foundation, Mrs. Cynthia-Maria Ghobril Andrea, and H.E. Mr. Rami Adwan, Lebanese Ambassador to France, a dinner in support of USJ was held at the Cercle de l’Union Interalliée. Mr. Frank Dubosc was the evening’s sponsor, and Mr. Arnaud de Puyfontaine was the honorary speaker.

Prof. Daccache led a Sunday mass at Our Lady of Lebanon of Paris Cathedral (17 Rue d’Ulm) in presence of the entire USJ delegation and members of the USJ Alumni Association in France.

Mrs. Imane Mostafei – Head of Cultural Affairs at the Educational Department of the Institut du Monde Arabe (IMA) – welcomed visitors to the exhibition “Lumières du Liban”. Then, Mrs. Gassia Artin conducted a one-hour tour of the exhibition. She showed the artworks that were displayed in the aftermath of the explosion in Beirut on August 4, 2020, as well as the scenography, which was created entirely by Lebanese artists.

The “Lumières du Liban” Exhibition is supported and funded by philanthropists Claude and France Lemand, who established a Fund and donated their entire painting collection to the IMA in 2018.

Following the visit, the President of the IMA, Mr. Jack Lang, met with Prof. Salim Daccache s.j., in the presence of H.E. Mr. Rami Adwan.

Reception at the Embassy of Lebanon in Paris.

To mark Prof. Daccache’s and the accompanying delegation’s visit to France, and at the request of H.E. Rami Adwan, a cocktail reception was held in the Salons of the Ambassador’s Residence, gathering various Alumni, Friends, and Partners of the USJ and the HDF around the Rector.

- Dinner in support of USJ

- Mass at Our Lady of Lebanon of Paris Cathedral