The United Arab Emirates has always been considered a strategic hub for culture, education, and knowledge. Believing that education is the pillar of all development, continuous efforts have been put into the Educational sector in order to prepare students to become professional practitioners, future leaders, and well-integrated citizens in the community.

Established in the heart of Dubai in 2008, Saint Joseph University Dubai is the first international branch of Saint Joseph University of Beirut. The foundation of the university has been the result of an academic cooperation with the government of Dubai in order to offer young Emirati students a prestigious Bachelor of Law program under the framework of the Edaad for Leaders Initiative.

Sharing the same vision of the mother campus in Beirut to serve the new generations in the United Arab Emirates with their cultural and human development needs, Saint Joseph University Dubai has taken part of the great project of the Emirate of Dubai to accompany and strengthen the urban and economic developments with cultural and academic developments.

Saint Joseph University Dubai is committed to offering its students the best choices of degree programs designed to cater for their academic and professional expectations. Through its varied and interdisciplinary courses, students tend to enrich their education and prepare them to their future careers. Students enrolled at Saint Joseph University Dubai, participate actively in the learning process which gives them the opportunity to solve real-life problems and assume professional responsibilities.

The graduates of Saint Joseph University Dubai excel in English as well as in Arabic and are fluent in French, the mother language of Saint Joseph University of Beirut. The university’s graduates are highly sought after among the professional legal field. Their success stories include a judge role at the DIFC courts, legal, key administrative and researcher positions at top companies such as Mubadala Investment, Expo2020, Bank of Sharjah, KHDA, PriceWaterHouse Coopers, the Public Prosecution, Twofour54, the Supreme Legislation Committee of Dubai government, Al Tamimi & Company, Jumeirah Group and many others. Also, many graduates pursue their studies at world class universities including Oxford University, London Business School, University of Leeds, Georgetown university, Melbourne University, and others. 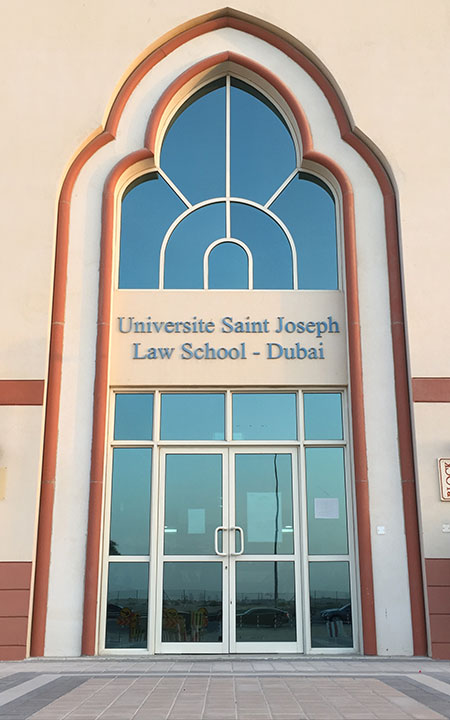 A glimpse of history

At the start of September 2008, pursuant to the approval of the University Council, the Rector of Saint Joseph University of Beirut, Professor René Chamussy, has inaugurated a center for university studies in Dubai, in the presence of his Highness Sheikh Mohammed bin Rashid al Maktoum, Prime Minister and Vice President of the United Arab Emirates, ruler of the Emirate of Dubai.

Since its inauguration in 2008, the School of Law in Dubai has been offering a prestigious Bachelor of Law program to students living in the United Arab Emirates with the aim of preparing them to become leaders in the legal market. The School has, in fact, designed a special program adapted to the Emirati and the GCC legal framework, while maintaining the same academic values of the program offered in the School of Law and Political Science in Beirut.

In September 2014, the collaboration with the Dubai government had come to an end, yet the University council had decided to continue, on its own, the mission of the Dubai entity. Aiming to offer more academic programs and based on concertation with experts on the needs of the market and the findings of a self-study conducted by the university, a Master in Translation program has been designed to cater for the translation and linguistic needs of the market. The Program was launched in 2016, focusing mainly on students and employees working in governmental institutions, banking and financial markets, law firms, media and any field pertaining to communication.

After more than ten years of establishment in Dubai and following the results of a self-study, the School of Law in Dubai has designed a Master program in law entitled “LLM in Business Law”. This program offers students the opportunity to delve into the most demanded topics in the world of business law. Furthermore, the program is designed to familiarize the students with the rules and practices of Business Law, in both local and international dimensions, and give them the ability to adapt to various legal systems.

The university has been considered also among the few entities accredited by the Government of Dubai Legal Affairs department to train lawyers granting CLDP points.

In 2019, the university has adopted its current name “Saint Joseph University Dubai”. The Dubai Campus is set to become a campus with strengthened local units of quality assurance and other services. All efforts will be done to focus on its structuration and fortification in order to enhance the education of the youth and keep leading them towards excellence.