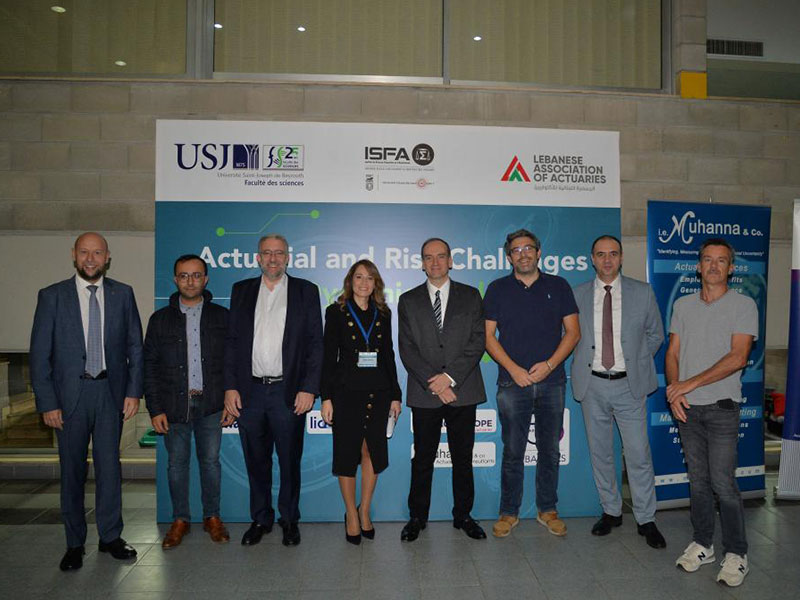 The Faculty of Science (FS) of Saint Joseph University of Beirut (USJ) held on October 26 and 27, 2022, the second International Conference on Actuarial Science, which has become an international meeting point for insurance professionals, actuaries, and risk managers. This second edition, titled “Actuarial and Risk Challenges in Dynamic Market”, coincides with the 25th anniversary of the Faculty. The conference which was in partnership with the Institut de science financière et d’assurances (ISFA) of Université Claude Bernard - Lyon 1 (UCBL) and the Lebanese Association of Actuaries (LAA) gathered around 20 international speakers and experts in the field, among which the Secretary-General of the General Arab Insurance Federation (GAIF). The conference was sponsored by Actuscope Consulting SA, Allianz Lebanon, LIA Assurex S.A.L., Bankers Assurance S.A.L., and i.e. Muhanna & co.

In her opening remarks, Professor Gihane Mansour Abou Jaoudeh, Head of the Department of Mathematics at FS, highlighted that the conference aimed to meet to the extent possible the challenges encountered by insurance companies in Lebanon during an unprecedented economic and financial crisis, among which are maintaining profitability, choosing a currency for premium payment, ensuring sustainability and paying reinsurers, dealing with the new IFRS17 regulation, investing in digitalization, etc.

For his part, Professor Richard Maroun, Dean of the Faculty of Science, thanked the organizer, the speakers, and the attendees of this conference in his welcoming speech. He put the accent on the mission of the Faculty and its collaborations mainly in the financial and actuarial sectors in collaboration with ISFA of Lyon helping the students to easily find a job in Lebanon and at an international level.

Professor Toufic Rizk, Vice-Rector for Academic Affairs, representing the Rector of the University, Professor Salim Daccache s.j., emphasized in his speech the importance of the topic of this conference nowadays. “Quantifying and analyzing risk is proving to be of crucial importance, especially in times of crisis,” he concluded.

The two-day conference discussed enterprise risk management, the regulation in the actuarial field, life and health from an actuarial perspective, and the role of data in insurance. Discussions emphasized the new business-as-usual situation following the crises and the emerging risks especially due not only to natural extreme events and climate change which are expected to increase in the Middle East region in the coming decades but also to geopolitical risks in the region and the world, the increase of cyber security risk, especially in the last years drastically affecting the enterprises. The regulation used in the sector was also presented, especially the transition between the standards and the challenges of implementation in the Middle East. The role of actuaries in the health sector was stressed with a focus on projects being conducted to create specific databases to better model the Lebanese insured population. Big data and digital transformation had also an important part of the discussions highlighting their impact on the insurance industry.

The panel discussion on “Market Challenges” was moderated by Me. Oussama Salman with the participation of Mr. Bassem Assi, CEO and Chairman of the Board of Management of Allianz Lebanon, Mr. Ronald Chidiac, an independent actuary, Mr. Elie Nasnas, President of the Association of Lebanese Insurers (ACAL) and General Manager of AXA Middle East, Mr. Labib Nasr, CEO of LIA Assurex S.A.L., and Mr. Pierre Sebaalani, CEO of Bancassurance S.A.L. The discussion revolved mainly around the relationship between actuaries and the related enterprises and associations, the talent development of actuaries and their retention, the adaptation strategy of the insurance companies in the crisis, and the investment of insurance companies in big data and digitalization. Moreover, Mr. Elie Nasnas announced that the ACAL Board of Directors has decided to sign a collaboration agreement with the Department of Mathematics at FS targeting future projects on Actuarial and Financial Science.

﻿﻿﻿During the closing ceremony, Professor Gihane Mansour Abou Jaoudeh (USJ) and Professor Stéphane Loisel (ISFA) presented final recommendations stemming from the conference emphasizing the need for well-trained actuaries in the region and for organizing and shaping the actuarial profession in Lebanon and the region given the emerging risks and the rapid changes taking place. These recommendations stressed also the implementation of Enterprise Risk Management, the development of actuarial science in the banking sector, executive education offered by the FS in partnership with the French Institute of Actuaries, and the focus on actuarial research projects related to climate change and air pollution risks, inflation, and others relevant to the Lebanese market.