Under the patronage of His Excellency Sheikh Nahyan Mubarak Al Nahyan, Cabinet Member - Minister of Tolerance, Saint Joseph University Dubai celebrated its 10th Anniversary in Dubai. The celebration was an occasion to celebrate the graduation of a new batch of students from the Law School and the School of Translation in Dubai, and a symposium was held under the title: “Tolerance and the Law: Two Basic Pillars for Building the Future.”

The ceremony was held at the Ritz-Carlton Hotel in Dubai, and was attended by Professor Fouad Dandan, the Ambassador of Lebanon to the United Arab Emirates, Professor Diab Al-Rashidi, Consul-General of Kuwait in Dubai, Professor Assaf Doumit, Consul-General of Lebanon in Dubai, Professor Salim Daccache, the Rector of the University, Professor Léna Gannagé, the Dean of the Law School, Professor Gina Abou Fadel Saad, the Dean of the Faculty of Languages and Translation and the Director of the School of Translators and Interpreters of Beirut, Dr Nisrine Abiad, the director of the Dubai branch, senior judges and advisors in UAE and Lebanon Courts, attachés at the embassies in the Arab countries and representatives of major companies in the UAE, and the most prominent law firms in the country. Members of the educational body from the mother university in Beirut also attended the ceremony, as well as the professors residing in the United Arab Emirates and the students' families. 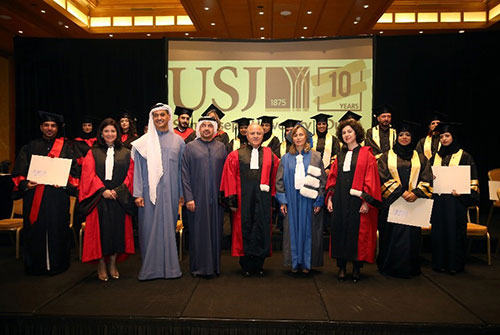 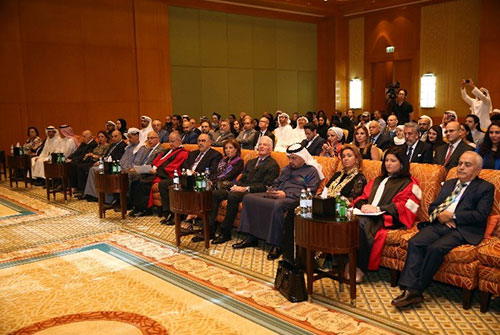 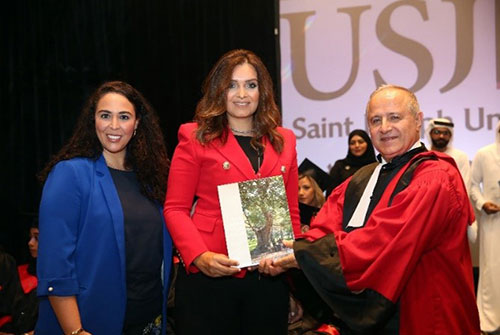 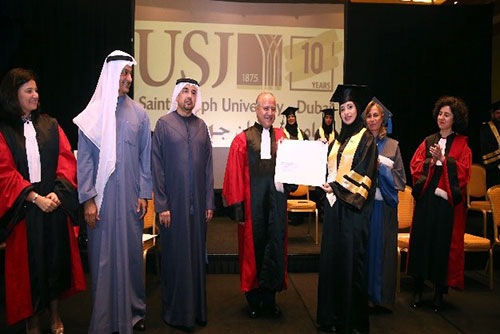 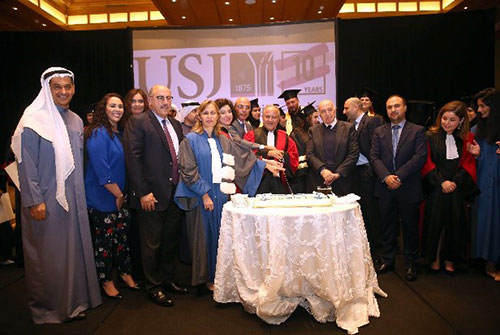 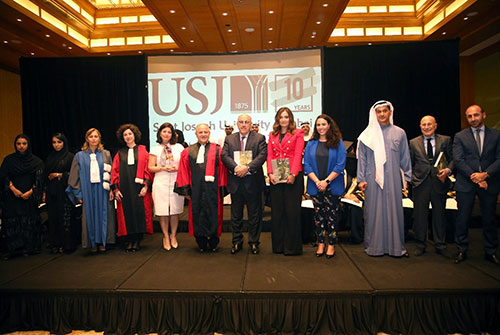 As for the Rector of the University, Professor Salim Daccache, he saluted His Highness Sheikh Mohammed bin Rashid Al Maktoum on his confidence in the university to build the energies of the shining Emiratis. On the occasion of the 10th Anniversary of the establishment of the Dubai branch, the Rector of the University presented His Highness with all the impressive success stories that Emirati graduates have achieved in the labor market, and in their enrollment to specialize in the most prestigious international universities. He further explained the role of the Dubai branch in activating the agenda of real and sustainable Emiratisation in the public and private sectors. He also described the role of tolerance as a fundamental principle in the tradition of Saint Joseph University since 1875.

For his part, Dr. Habib Al Mulla, CEO of Baker MacKenzie Habib Al Mulla, reminded the audience of the story of establishing the Law School in Dubai in 2008, shedding the light on the historical milestones of this establishment.

In his speech, Mr. Essam Al-Tamimi, CEO of Al-Tamimi &Company, linked the concept of tolerance to the legal profession, stressing the professional ethics of the lawyer and his role in accepting the other and establishing the state of law.

Dr. Nasser Al-Saidi, an economist, touched on the relationship between tolerance and the field of business, and the Dean of the Law School, Professor Léna Gannagé, praised the role and efforts of the founders of this project, most notably Professor Fayez Hage-Chahine, who in turn explained the role of the Law School and Law Education in establishing the values of tolerance in society.

During the ceremony, speeches were delivered by a number of graduate students, in which they expressed their gratitude to their families and university, and thanked His Highness Sheikh Mohammed bin Rashid Al Maktoum, the founder of the initiative and idea to establish a branch of a highly reputed university in the Emirate of Dubai, and to give them the opportunity to study in it.